I’m Just Saying: And then there were five 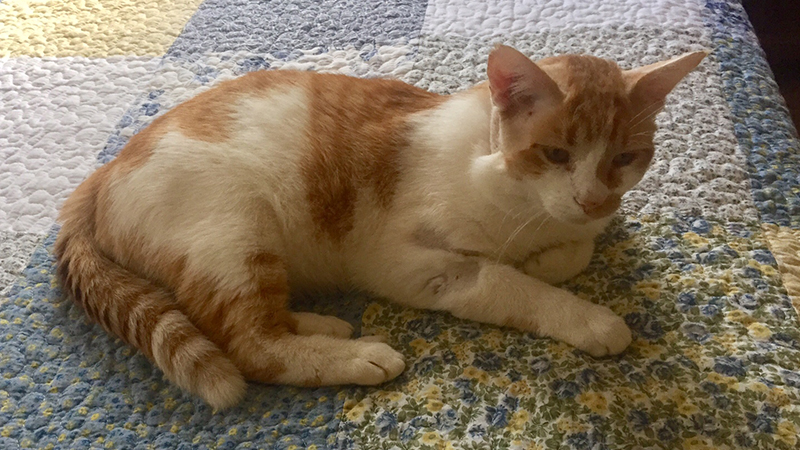 “Oh, no,” I said grimly to the orange tom who appeared routinely last winter, glaring through the windows and terrifying our other cats. “You are not welcome here, you brute.”

Paul and I began to refer to him as Bub, which was derived from his official title, ‘Big, Ugly, B****** (feel free to add your own noun, but I can assure you it was neither ‘Buddy,’ or ‘Biscuit’).

Bub was ginger and white with a big, tom head and pinkish-yellow, piggy eyes. He was most noticeably intact, well fed, and threatened anyone who might cast a glance in his direction, by hissing and yowling. Even Rosie, our terrier, wouldn’t go near him.

“Is he yours?” I phoned a couple of neighbors.

“No, but we’ve seen him around for a couple of years,” I was told. “He seems to go from house to house.”

When the weather turned quite cold last winter just before our first snowfall, I knowingly made the fatal mistake of putting some food out for him. He could have easily taken refuge in the barn, nestling into the hay, but he wouldn’t. He continued to sit near the door and front windows in all weathers and I began to take pity on the giant headed Cheeto. Bub would warily bolt down whatever kibble I put out, but wouldn’t let me near him.

Then one night, when it was going to be particularly raw and wet, I heard him meowing somewhere from the shrubbery in the front yard and I descended the steps with his saucer of food, calling him.

To my surprise, he came trotting up and began to eat with me still standing over him and impulsively, but carefully, I bent down and lightly stroked his back. He looked up, squinting his piggy eyes, licked his chops, and continued eating.

“Success!” I relayed to Paul, who had paused the movie we were watching while I slipped outside. “He let me pet him.”

“Success is bringing a fifth cat into this house?” he queried, not looking up.

“Well,” I amended, thinking hard, “the success is that he isn’t rabid and didn’t take off my hand. And he’ll be a barn cat.”

Bub then promptly disappeared, as toms do, for a few days and another enormous ginger cat appeared in his place. A quite beautiful cat, actually, with rather a kittenish face inserted into a head the size of a coconut. He began spraying, despite my shooing him away, all the shrubbery in which Bub had been hiding. And then later that day I heard the most dreadful cat fight.

As menacing as Bub tended to look, I could only imagine he was the victor, but I saw nothing of him until the following morning, when he appeared at the mudroom door, staring in morosely, his face swollen and scratched, his head, neck and shoulders covered in dried blood.

“Oh, Bub!” I cried, and picking up a towel, slowly opened the door, and scooped him up, whisking him into the bathroom. I texted Paul, who was at a meeting, and when he returned, we took turns gently cleaning Bub up as best we could, amazed at his willingness to accept help. Paul loaded him into a crate and took him to our vet where his wounds were attended to, a first round of antibiotic administered, and his gentleman parts removed.

“What happens in Landrum, stays in Landrum,” I said to a groggy Bub, when he was returned to us the next day, looking much better, as well as lighter, since his counterweights were missing.

But what a model patient he was! For ten days, I had to insert a dropper of antibiotics into his mouth and he never squirmed or resisted. In fact, any human touch resulted in a deep throated purr. And best of all, his mere presence in the house has halted all the in fighting between the other cats. He sits like an impassive buddha, regarding the others as one does a rather limited menu. I had not finished writing my novel at the time, and as he began to keep me company by reclining where he’s not allowed to, on top of the kitchen table, I decided to add him to a couple of chapters.

“You’re immortalized in print now, Bub,” I told him, as he watched my fingers fly over the keyboard.

He gazed at me and blinked his piggy eyes before surveying the other cats, all lying obediently on the floor, sleeping in the sun.

And then there were five.