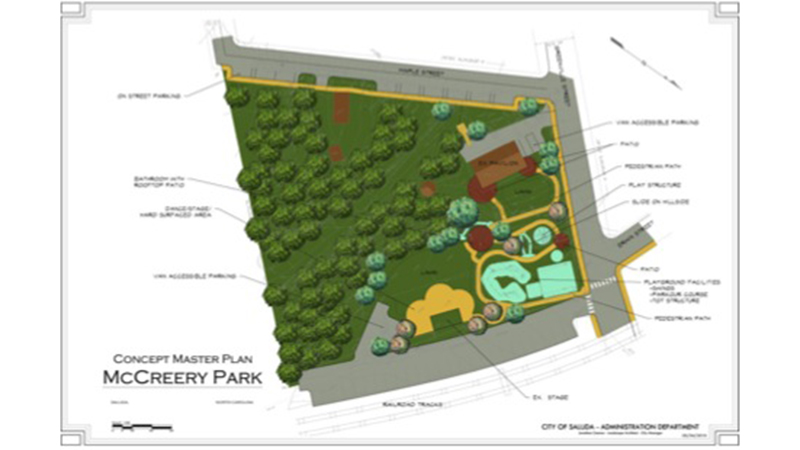 The City of Saluda will hold its inaugural Swing Into Spring event on Saturday, March 25 from 11 a.m.-3 p.m. in McCreery Park. The event is a kick off for raising money to fund the renovations mapped out in the McCreery Park Master Plan which was adopted by the Saluda Board of Commissioners in May 2016.

The Parks Planning Committee developed the new master plan with the expertise of City Manager Jonathan Cannon. The plan will be implemented in phases as money is raised. The committee is applying for grants and asking the community for donations. The overall project will cost between $300,000-$400,000. However, the fundraising goal for 2017 is $15,000. This amount will allow for ADA/Universally accessible grading and landscaping at the northwest entrance of the park, as well as purchase and installation of a new swing set.

During the event on March 25, the committee hopes to raise awareness in the community about the renovation plans while enjoying the park space and raising money to make the renovations possible. A free Parkour demonstration and mini-lesson and free petting “zoo” will start the fun at 11 a.m. Saluda’s history will be celebrated between 1 and 3 p.m. with traditional Saluda square dancing. A raffle of local arts will be drawn at 3 p.m. Tickets are on sale now at the Saluda Library and will be available during the event.

Gourmet hotdogs and ice cream floats will be sold starting at 11:30 a.m. in the pavilion. Join us for all this and more.