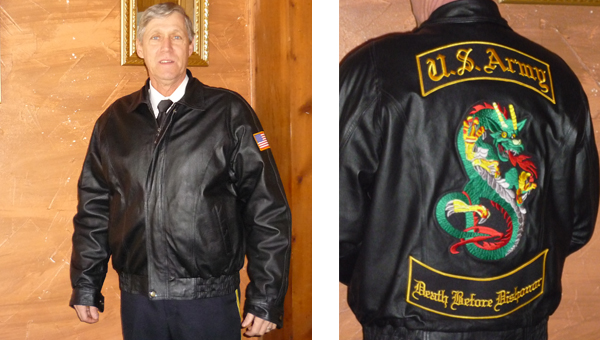 Today’s tale will not involve any of my kids, though it all began with beautiful Britta, the black 3-year-old German Shepherd. There are two projects in the works, an old cat that may have cancer, and possibly helping an autistic young lady find a suitable companion. I’m still working out how and if I can help.

Most people are aware when the mother of a Gold Star and a Blue Star serviceman came to me for help with her dog Britta. By the way, Britta is doing well and I will keep my promise, that whatever Britta needs that is within my purview, I will provide. This tale is about another promise I made.

When Debbie, Britta’s mom, presented me with the beautiful black leather jacket with the dragon on the back and the motto, “Death before Dishonor,” I was so moved just to hold her son’s jacket I vowed I would find a way to give it proper honor.

I asked fellow supporters of homeless soldiers both at the Knights of Columbus and the American Legion. The final outcome was that I would raise $500 to bring to the homeless vets and present the jacket to a deserving vet.

As what often happens in my life, the date I was to bring the check to the homeless vets, I had a doctor’s appointment, this time a post op for cataracts, for my left eye. My right eye has been done and went well.

I contacted Bevin Corbin, the commander of the VFW Post 9116 in Columbus and the finance officer of the American Legion 250 in Tryon. Bevin has the exact same dragon logo tattooed on his arm and as luck would have it, the jacket fit him perfectly when I presented it to him.

Although I believe the Good Lord knew long ago the jacket would wind up with Bevin, and as for the coincidences of it fitting perfectly, I’ve often said, “Coincidence is just God’s way of making a miracle anonymously.”

I asked Bevin if he would take the check to Asheville to the program for the homeless vets. I learned that the American Legion has pledged $2,000 a year and he was due to bring a $500 quarterly check. I told him that I pledged I’d raise at least $500 but it so happens I raised $1,000 and handed him the check with the note, to honor Geoffrey Whitsitt, our fallen soldier.

I wish to once again thank all those who reached out to support the homeless vets in honor of our fallen soldier.

I can somehow envision Geoffrey up there standing next to our Lord and smiling down on us saying, “Now that’s the country I laid down my life for.”

Highs and lows, ups and downs