Sheriff Hill: last straw on need for new jail was urine dripping in his face 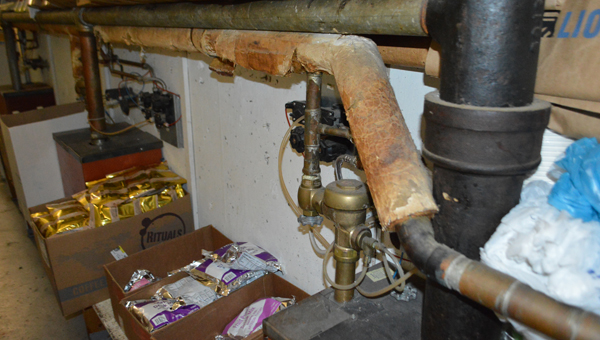 The jail’s food storage, located in a narrow hallway with plumbing pipes around it. (Photos by Leah Justice)

Polk County Sheriff Donald Hill told commissioners this week his last straw on the need for a new jail was falling down stairs and at the bottom of his fall realizing urine was dripping in his face because of plumbing problems.

Commissioners met Monday, April 18 and heard from Hill who detailed some of the issues in a point blank conversation.

Hill said he’s told commissioners since he’s been in office that there are major problems and they need to get the ball rolling.

“We’ve got urine coming through the ceilings, feces on the floor,” Hill said.

Hill said what put him over the top was a couple of weeks ago his feet flew out from under him while walking down the stairs.

“I’m looking and my britches are all wet and something hits me in the head,” Hill said. “Water hits me in my face and I realize I fell in urinal mess.”

Hill said the Polk County Jail is all he’s ever known. He started working there when he was 20 years old as the only third shift jailer, around 1990.

“I’ve (given) a lot in my career for the county,” Hill said.

He spoke of known mold in the building and said the response he got from the county was to get some trustees and some bleach and scrub it down.

He said the fall with urine dripping in his face was pretty much his breaking point.

“And I thought, people shouldn’t have to work in this mess,” he said.

Hill spoke of a recent sewage burst that flooded a storage room where he lost $20,000 worth of bullet-proof vests because they were covered in sewage. He spoke of lying in bed at night worrying if it rains that he’s going to have a flood because water literally seeps through the walls. 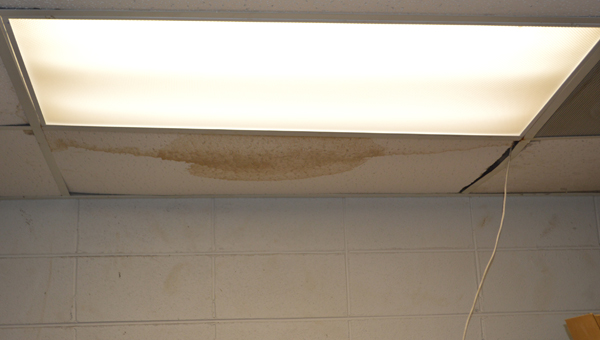 Stains are seen on ceiling tiles throughout the current jail from leaks over the years.

“It’s aggravating for me as a sheriff and it comes to rain,” Hill said. “I want to go home and go to sleep. I sit at home and I wonder if my building is flooding.”

He said the last rain the county had he was laying in bed thinking, “I wonder if my building is flooding. I walk in the back door and sure enough, I’ve got water coming in the basement, right near the evidence room and communications. Here I am at 2 a.m. with a shop vac getting water out of here.”

And the pump that’s stuck in the back door to prevent flooding isn’t working, Hill said.

“I’ve got water coming from the foundation of the wall,” Hill said. “You can stand there and look at water coming through the walls.

Hill said he realizes a new jail and a tax increase is unpopular but something has got to be done. He said when he fell, he pretty much said, “this is ridiculous. I shouldn’t have to fall down a bunch of stairs and waller around in a bunch of human urine.”

Hill said the county has spent thousands of dollars on renovations and the plumbing never got fixed. He said he keeps a bucket in his office because of water that comes through the ceiling.

“It doesn’t matter if I’m there or not years down the road, but the officers that work in that office deserve to work in a healthy environment,” Hill said. “They put their lives on the line every day. They deserve to work in some decency.” 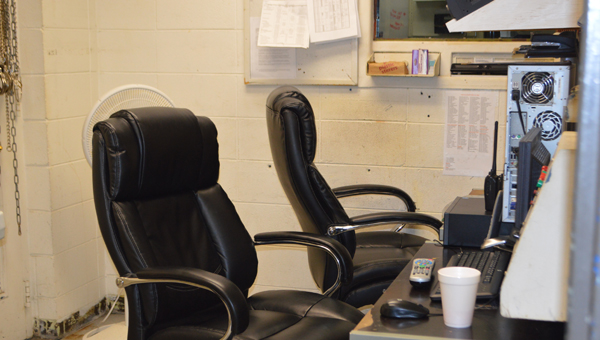 Hill said years ago they found mold and everyone knows the building is full of mold.

“It may be your son or your daughter,” Hill said. “But I believe you deserve to be in your own county. If my child got in trouble, I want them here, where I know the sheriff. I wouldn’t want my child stuck three counties away.”

Polk’s current jail is a 25-bed facility and cannot house females or juveniles. The county is most of the time overcrowded and pays $45 per day to house inmates elsewhere, mainly Transylvania County, which is 45 minutes away. Polk also sends high-risk inmates to other counties because Polk’s jail is far from maximum security. The county is considering building a new jail that could house up to 100 inmates at full capacity.

Hill also answered questions regarding state inspections that for years have been negative, including safety issues such as sprinkler systems and having no medical area. 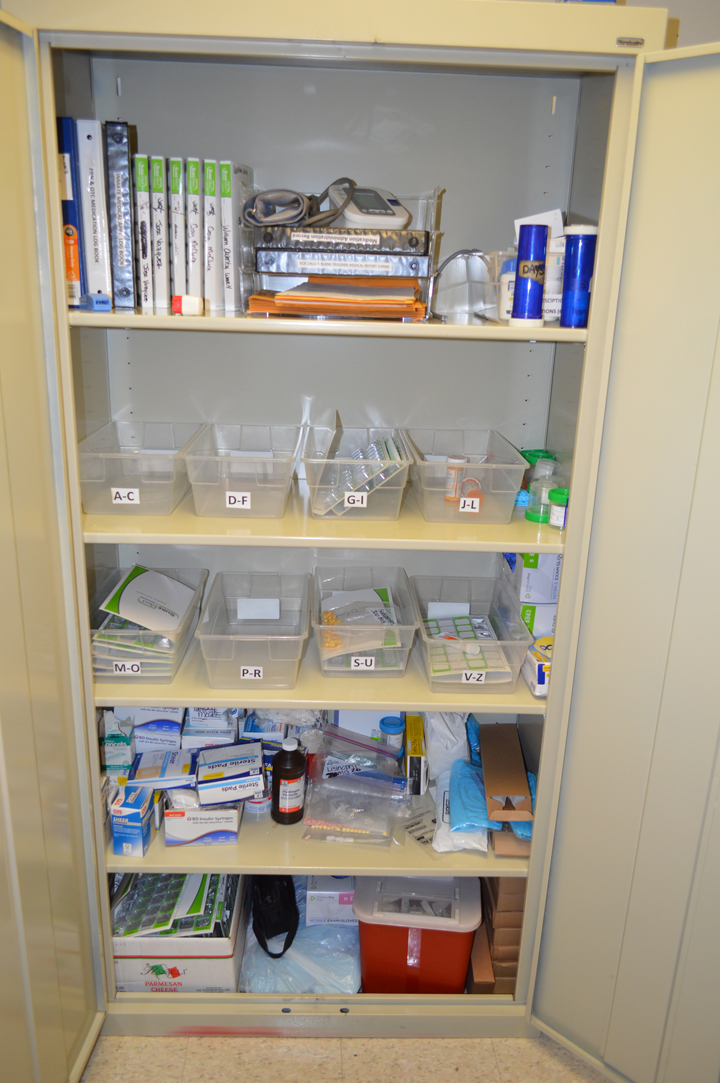 The jail’s medicine cabinet is located in the jail administrator’s office.

Hill said the majority of people arrested here aren’t from Polk County. He said the big problem now is heroin, which he said he doesn’t have the facility to deal with.

“I don’t have the facility, the medical to deal with these people,” Hill said. “Nobody understands the liability the jailers and me are put under. They expect us to be medical experts. I don’t like that.”

Commissioner Shane Bradley said he appreciates Hill explaining the conditions like he did.

“It’s not just about prisoners,” Bradley said. “It’s about employees working there; it’s about the county as a whole.”

Hill said he’s responsible for all that and he’s got a door there now that’s completed rusted because he can’t control the water that’s coming in the building. 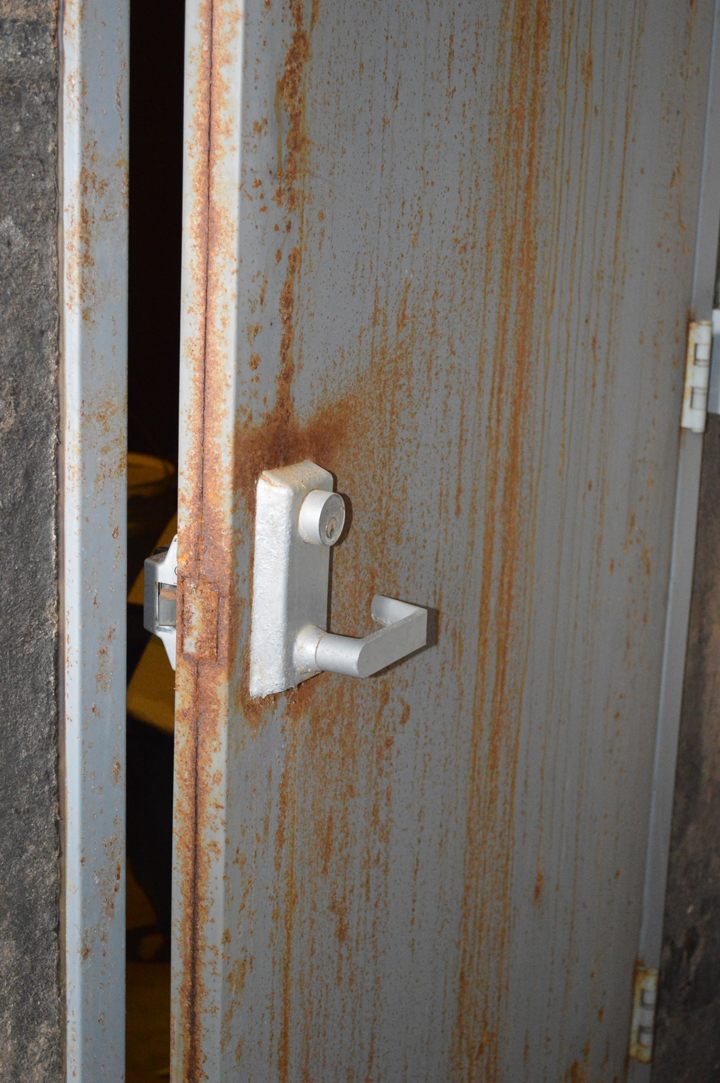 A rusted door from flooding that leads to the outside of the jail in the basement.

He said he has a shower that can’t be used because “the smell will run you out of the building.” 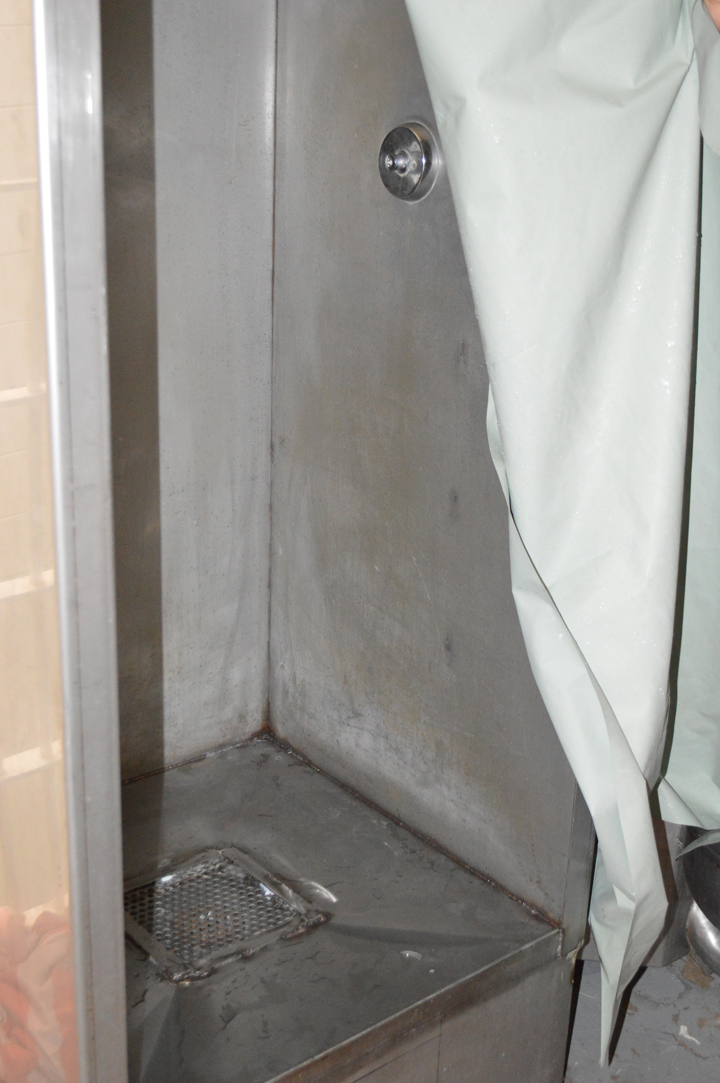 One of three showers for the inmates. This shower is shared by 19 inmates.

Hill also said because of the aged and undersized jail, inmates get out more quickly than they should.

“You’re doing a disservice to the citizens of the county,” Hill said, “to the victims of crimes. They need to be sitting in jail. They don’t need to be getting them out because we’re overcrowded.”

Hill also mentioned the air conditioning system that won’t cool the building in the summer unless he runs a special water sprinkler to cool the outside units. 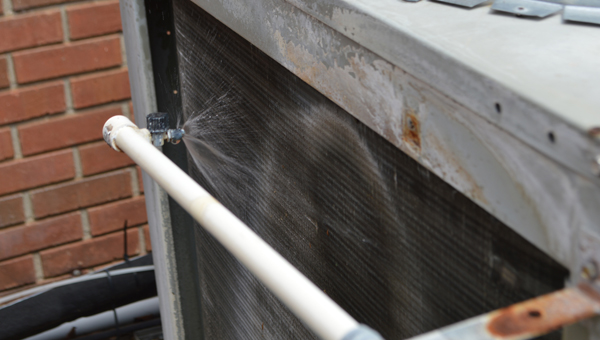 The outside air conditioning units of the jail have to be hosed down with water when it is hot or they won’t run, sheriff Donald Hill told commissioners.

The Bulletin took a tour of the facility this week when it was 85 degrees outside. The upstairs was extremely hot with large fans running, particularly in the confinement area. Ceiling tiles were sagging in many areas with stains on the tiles from leaks and flooding. Mold could be seen on the walls, particularly in the basement where investigations and evidence are located.

The public restrooms were rusted with old toilets and sinks. The jailer’s control room is small and cramped and the jail administrator’s small office also serves as the medical room with medical supplies in a small metal cabinet. The sick room is so small it only has room for a small cot and a stainless steel toilet.

The kitchen storage area is a long narrow hallway with food stored on shelves with plumbing from the inmate area weaving through the shelves.

There are three inmate showers in the entire facility and they are small stainless steel boxes, with blue plastic curtains. The main shower is shared by 19 men and is situated in front of the cells with a toilet beside it. Inmates eat on a table fixed to the wall right outside their cells. There were a couple rooms where drains in the floor were covered because of the smell of sewage gas coming up from the floor. 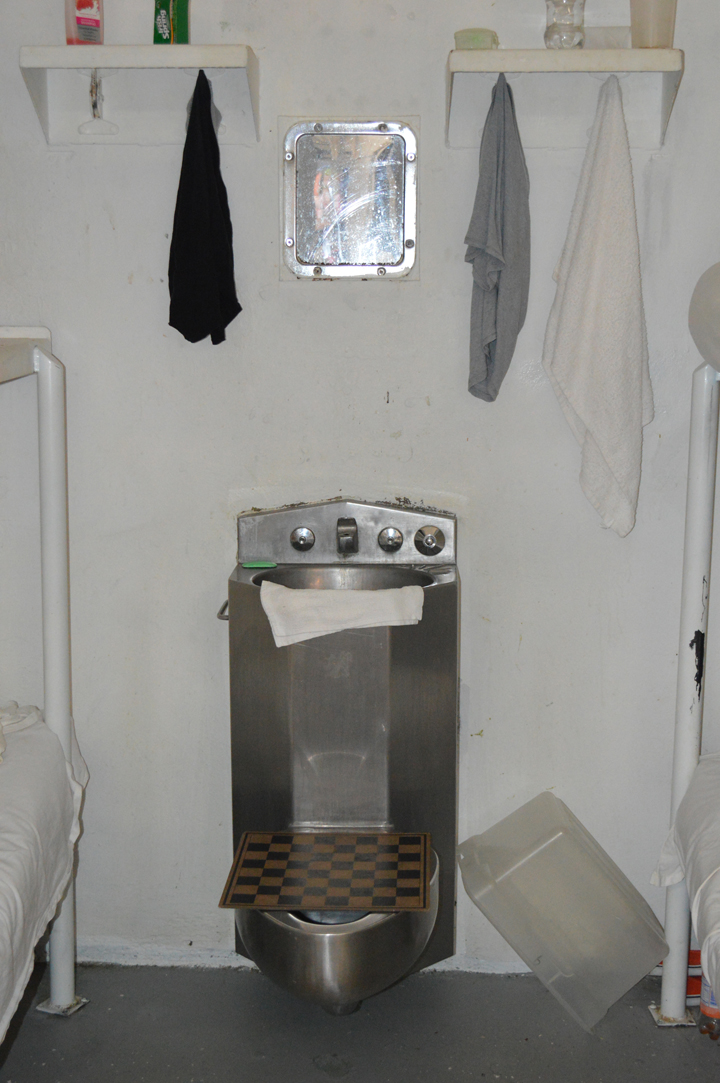 Inside one of the cells in the jail.

Hill said the facility is so old some things just can’t be fixed and he has issues trying to find people who still do that kind of work. He said he has to replace keys now and one key will cost $5,000. He said he had to fix some jail cells the other day because the doors didn’t work and the bill was about $7,000 because there is only one person they can find out of Tennessee who does that kind of work anymore.

“I appreciate commissioners finally addressing the issue,” Hill said, “and finally taking the stand that something has to be done on behalf of me and my officers who have had to deal with this for years. It has gotten old over time. It’s gotten ridiculous.”

“Bert” Leonard, “The Reason for Golf in the Foothills”

A tournament or exhibition in 1921 at the Tryon Country Club. Bert Leonard is pictured in a dark vest... read more