By Robin A. Edgar

Leo Tarpley was born in Springfield, Mo. in 1924 and moved with his family to Liberal, Kan. in the high plains in Kansas. The area eventually became the Dust Bowl and, when the dust came blowing in, his mother put wet sheets over the windows to keep some of the dust out. Surviving the Dust Bowl was a big deal because so many, especially children, died there. His father was a salesman for J.I. Case Company selling tractors and combines so they lived like nomads. They moved to Dalhart, Texas in the panhandle when Leo was in the first grade, and, when the Depression hit, his father’s customers, who were farmers, felt the hard times. 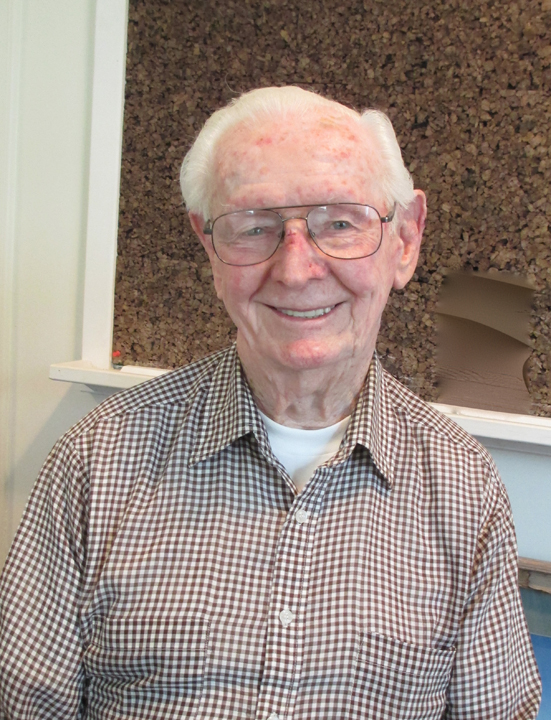 “I remember when one of the farmers couldn’t pay my dad, so they gave him a cow. My sister and I went in the car with my dad to get the cow, which we tied up with a rope and led back to town. We learned how to be thankful for what you have and to share and care for other people during those times.”

“After we moved to Lubbock, Texas in 1932, the Depression eventually took dad’s job away, too. We moved to Mountain Park, Okla. where my dad’s parents lived. They had a hotel business and ran a funeral home and hardware store out of the lower floor of the hotel.”

“My dad opened a funeral home in Snyder, Okla., which was just three miles away from Mountain Park and had a population of about 1,300, counting cats and dogs. The cotton fields and farming there reminds me of where we now live in South Carolina. We moved there during Roosevelt’s term and I was starting the fourth grade.”

“For fun, we played marbles and tops. On Saturday afternoons, we went to the theatre to see cowboy movies with Richard Dix. I delivered the Saturday Evening Post in 1933 to earn some spending money to buy candy bars. My sister, who was four years older than me, wanted to get a perm. She went out to my Uncle Johnnie’s farm to pull boles from the cotton. She was 12 years old and worked all day in the fields in the heat for 11 cents and decided not to pick anymore.”

“I occasionally went out to Uncle Johnnie’s farm on weekends to help with the chores. One time, when I was about 12 years old, I was working out in one of the pastures that had a pond and decided to take off all my clothes and go swimming. Uncle Johnnie came running out, yelling at me to get out of the water. I found out that his dog had been swimming in the pond the day before and was killed when he disturbed a nest of water moccasins. That’s just one example of the many times the Good Lord has taken care of me.”

“When I was in the eighth grade, my folks divorced and Dad left Mom with the funeral home. After her sister Mabel died, Mom married her sister’s husband, Dr. Frank Balyeat, and we moved to Norman, Okla. I started high school there and rode my bicycle about two miles to Norman High School. I graduated the 12th grade at 17 years old when the country was at war.”

Leo was a senior when the Japanese bombed Pearl Harbor. He enlisted in the Army Air Corps in May 1943 and served as a pilot with the 346th Squadron and the 99th Bomb Group in the 15th Air Force in southern Italy. When he returned home, he married first wife, Reba, and they had three daughters, Teresa, Tonia, and Tanese. After graduating from University of Oklahoma, he worked as a comptroller of the Humpty Dumpty/Standard Supermarket chain in Oklahoma City, where he met his present wife, Mariana.

In 2006, the Tarpleys moved to Landrum, where Leo volunteers for St. Luke’s Hospital and the Hospice House. He is also actively involved in the First Baptist Church. His advice to future generations is to learn to help other people and to think about them, even in good times.

Quotes for a winter’s day

The light of a small town, of spirit, of…