A Texas family quilt gets a second chance 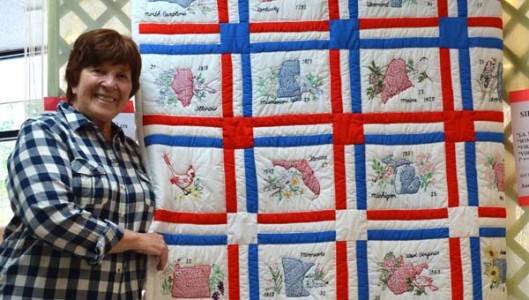 A beautiful quilt of obvious heritage quality was found in a box of donations to the
Second Chance Thrift Store in Columbus in January. Recognizing its value as a
significant piece of art and discovering the artists names on the back of the quilt inspired
Ruby Drew, pictured, to go on a treasure hunt to find those who made it.
(Photo submitted by Ruby Drew)

A beautiful quilt of obvious heritage quality was found in a box of donations to the Second Chance Thrift Store in January of this year.  Recognizing its value as a significant piece of art and discovering the artists names on the back of the quilt was exciting and inspired a treasure hunt to find those who made it. The names were Winnie Lou and Virginia Stark.

After a significant hunt on the internet by Ruby Drew, a volunteer at Second Chance, Drew located the Stark names in Goldthwaite, Texas. Winnie Lou and Virginia both had passed away in 2010. The search followed to children of Winnie Lou. A son, Larry Stark, of San Antonio, Texas returned a call and filled in “the rest of the story.”

According to Mr. Stark, Winnie Lou and Virginia were sisters-in-law, both married to Stark brothers. They had a love of quilting and even when one moved to Arizona, they would construct portions of a shared quilt in their respective towns, then gather at a specified time to put them together. They constructed 10-12 quilts in this manner during the 1960s and 70s. Some of the quilts got worn out, but some were preserved in tissue in cedar chests, which is the case with the beautiful states quilt donated to Second Chance. It is adorned with embroidered silhouettes of the states and embellished with the state birds and flowers on a white background. One would not guess that this quilt is 50-55 years old, given its pristine condition.

When the sisters passed away, the remaining quilts were dispersed among the four children. One son lived in Columbus, N.C. and when he became seriously ill, his family came to Columbus to get him and donated a good portion of his house furnishings to Second Chance Thrift Store. They were not aware that the quilt was in one of the boxes but assured Drew that their mother would like that the quilt would be offered to support Steps to Hope, an organization that supports victims of domestic violence.

This quilt is currently on display at Second Chance Thrift Store and is offered in a silent auction. The auction ends at noon on Tuesday, March 31. Come see this example of exquisite art. Now you know “the rest of the story.”

Photo submitted by David Widdicombe. The Harmon Field Music Festival returns Saturday, April 25 from 12-9 p.m. There will be... read more