Cowan retires from Polk Board of Education after 32 years 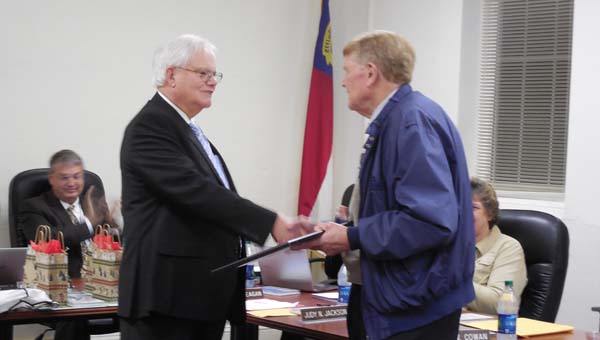 Cowan receives a plaque for his years of service from Chairman Geoffrey Tennant at the Polk County Board of Education meeting on Dec. 8. (Photo by Alissa Fiorillo)

James Cowan, who has spent over three decades on the Polk County Board of Education, has decided to retire from his member position.

After 32 years as an active board member, Cowan said he has witnessed many changes in the area and school system firsthand.

“When I first started I was on the Tryon Township City Board,” he said. “That’s back when Polk and Tryon were separate, so it wasn’t as big as it is now.”

When Cowan first served on the board of education in 1977 there were only two schools in the area. “There was Tryon City High and Tryon Elementary,” he explained. “The elementary school was kindergarten through eighth grade. Things were nowhere near as spread out as they are now. That was before they voted on the merge.”

Cowan spent some time away from the school system during the merge of the two school systems to help his family run their supermarket. In 1994 he decided to return to what is now the Polk County School Board.

Over the years Cowan has witnessed the expansion of the Polk County school system. “I was there when we first voted on the property for the middle school,” he remembered. “That was something I helped fight for.”

Cowan said that the additions that he stood so strongly for were his highlight moments during his school board career.

“I was glad when we did the add-on to Sunny View and expanded the library and gym, and when we expanded the band room at the high school,” he said.

“I was most proud when we built the middle school. People didn’t think the school was necessary and a lot of them fought against it. The election for the addition was originally shot down and we had to get help from the commissioners. We kept fighting for it, though,” Cowan added.

Since completing the middle school, Cowan has had several people thank him and the board for helping push the importance of adding on to the school system.

“People told me they could see a big difference in the system now that we have the school,” he said. “Even the people who were against the addition have come to me and said they were glad it was approved.”

City merging and school expansions are not the only thing Cowan has witnessed. “I was there when they installed the first computer system at the schools,” he explained. “It was a nice system and we were excited to get one.”

Don’t expect Cowan to jump on a laptop or tablet anytime soon, though. “I can’t even type on these things now,” he laughed. “It all sure has changed a lot since that first computer system.”

Cowan hopes the board will continue to go in the same direction it was when he left it. “The latest big project we worked on is the virtual early college,” he explained. “It’s a high tech facility that allows high school students to take college classes online for two years worth of credit.” Cowan said he is happy to have been a part of a group of people who pushed for such modern things.

Cowan plans to stay in touch with the members of the Board, but does not plan on getting involved again unless he feels like he is truly needed.

“I’ve always thought if you hire the best qualified people and let them do their job then great things will get done,” he said. “I’m proud that we have one of the best school systems in our country and Superintendent William Miller is at the head. Our boards have had a great working relationship and it’s a pleasure to have served.”

“Coaching is teaching, and teaching is coaching,” is Jamie Thompson’s philosophy. Thompson should know. As head coach of the Polk... read more