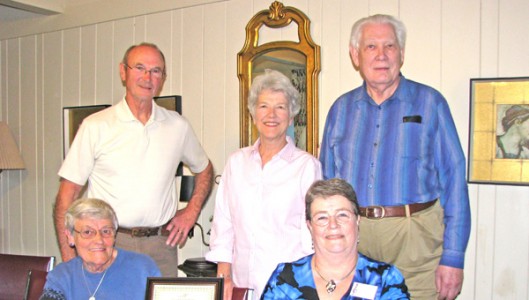 Community Chorus secretary Joan Lonnes is joined by four of the 19 past Chorus presidents she has served following her presentation of a second wind award. Her award was a surprise during a rehearsal of the chorus for their April 29 spring concert. Joan Lonnes (sitting left) is joined by president Lee Lindsay and supported by past presidents (left to right) Art Brown, Nancy Hiley and Donald Hawthorne. (photo submitted by by Art Brown)

Born in Philadelphia of German immigrant parents, her childhood was on a Bucks County farm in Pennsylvania.  She was degreed at Kutztown Teachers College in elementary education and actually returned home to teach in a one-room school house, the same she had attended as a child.  Joan Lonnes married Wolfgang (Wolfie) Lonnes in 1959 prior to their move to Tryon in 1969.
The Community Chorus started in 1973 as the Rotary Festival Chorus. In 1976 it became the Rotary Chorus and became an independent Community Chorus in 1977 at which time Lonnes was encouraged to serve as its first secretary.  She has served as secretary continuously since that time and has been a vocalist in the Chorus, missing but three concerts in those years. The Rotary Club of Tryon has awarded Joan a prestigious Paul Harris Fellowship with Rotary International and an Honorary Membership in the Tryon Club.
Lonnes is an avid tennis player with interests in music, travel, puzzles and cooking. Her volunteer work has been spread to Holy Cross Episcopal Church, Outreach Ministry (Meals on Wheels), Hospice of the Carolina Foothills, Polk County Community Foundation Scholarship Committee, Foothills Humane Society and the Community Chorus.

Seay no longer school board candidate