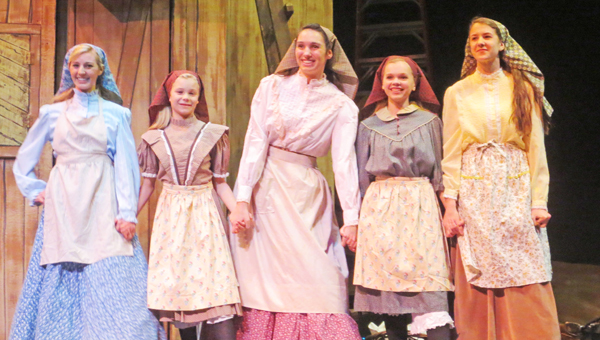 As all young women can relate, sometimes tradition gets in the way of following your dreams.

When a matchmaker gets involved in your love life – you should be so lucky?

Tryon Little Theater’s “Fiddler on the Roof” is all about tradition and preserving family values in a time of turmoil. So, “With no dowry, no money, no family background – be glad you got a man” is the sentiment of the time.

For sisters Tzeitel, Hodel, Chava, Shprintze and Bielke, the fear is getting stuck with a man for life who is old, fat, a drunkard and has a temper.

It is almost too much to bear – especially when there are some younger, cuter men on the horizon.

Kate Riedy portrays the oldest sister, Tzeitel, and is well-known on the TLT stage, appearing most recently in “Willy Wonka,” as well as the sweet-voiced Connie Miller in the “1940s Radio Hour.”

A senior, she hopes to attend Converse College and get her degree in musical theater with a minor in opera.

Miriam Jackson plays the second sister, Hodel. She graduated with a bachelor of music in vocal performance from Converse College in 2010 and has an impressive resume with Spartanburg Little Theater, Spartanburg Ballet Theater, Greenville Light Opera Works, Converse Opera Theatre and Spartanburg Repertory, and has performed the National Anthem at baseball, basketball and hockey games all throughout the Upstate of SC.

Emily Kocher (Chava), is a multi-talented young woman – an equestrian, member of the Polk County High School track and soccer teams, and an actor and singer in many TLT shows and others around the area (including SLT).  This time, however, she has to contend with her real-life mother being her on-stage mother in “Fiddler.”  No small feat.

Bethany Ghent, 14, (Shprintze) is in the ninthgrade at Landrum High School and loves singing and theater. Although this is her first TLT production she’s appeared in a number of Spartanburg Little Theater productions in the past.

The youngest daughter (Bielke) is played by Emma Hay, age 11, who goes to Polk County Middle School. Her passion is horses and reading, but she has obviously caught the acting bug since she appeared on stage in last year’s youth production of “Willy Wonka.”

You can see these wonderfully talented young women in TLT’s “Fiddler on the Roof” playing Feb. 20 – 23 at the Tryon Fine Arts Center (34 Melrose Avenue).

Clowning with Avner at Super Saturday

He calls himself “Avner the Eccentric.” He is an American vaudeville performer – a clown, a mime, a juggler, slight-of-hand... read more