Clowning with Avner at Super Saturday

He calls himself “Avner the Eccentric.”

He is an American vaudeville performer – a clown, a mime, a juggler, slight-of-hand magician, international stage and film actor, and he has been called “a clown for the thinking man and the most exacting child.” 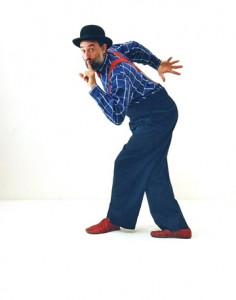 Just the artist for Super Saturday.

Avner will bring his truly unique comedy to the Tryon Movie Theater March 15 with back-to-back performances at 1:15 and 2:30 p.m., sure to delight audiences of all ages.  Joel Siegel of ABC-TV said of Avner, “I laughed for two solid hours — the show lasted an hour and a half.”

During his wide-ranging career, Avner played the title role of “the Jewel” in the Michael Douglas/Kathleen Turner film “The Jewel of the Nile.”

He took his own shows to the Edinburgh Festival, Israel Festival, Festival of American Mime and the International Festival du Cirque in Monte Carlo.

He has performed on Broadway and Off-Broadway, at Renaissance fairs, and spent time as a puppeteer and teacher of theatre skills.

Now Tryon has him for all of Super Saturday.

The ticket Round Robin to fill pre-orders will take place March 4, with the box office open at the Tryon Fine Arts Center March 5-7 and March 12-14 from 10 a.m. to 4 p.m., and on Super Saturday itself beginning at 9 a.m.