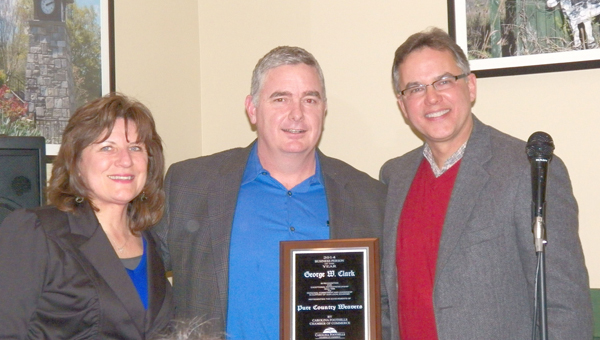 Members of the Carolina Foothills Chamber of Commerce gathered Thursday, Jan. 30 to note community contributions by businesses and individuals who the chamber felt made a significant impact on the community.

“You are probably going to be very surprised when you here the description of this business, because it’s a low key operation in the area. This business has over 60,000 customers worldwide,” Karaman said.

Named Business Person of the Year was George W. Clark with Pure Country Weavers. Pure Country Weavers opened in 1988 with the sale of a woven blanket from the trunk of a car. Since then the business has grown to employ 65 people locally to produce 10,000 products.

In conjunction with its sister businesses, another 60 people are employed in the dying of yarn. The sister company, Carolina Yarn Processors, even recently completed a building expansion.

Outstanding Citizen of the Year Bob Lane was out of the country, so his son Scott Lane accepted the award in his stead. Bob Lane was acknowledged for his contributions to improving the vitality of downtown Tryon and two of its historic buildings.

The most recent of these accomplishments included the renovations of what is known as the former St. Luke’s Thrift Shop, now St. Luke’s Plaza that holds Terra on Trade and the Ruby Slipper. Lane also contributed a great gift to the community by funding the renovations to the historic Sunnydale building and gifting it to Tryon Little Theater. The building is now rented out for community events, with funds helping to support the theater group, and is often used for rehearsals, theater camps and more.

In particular, chamber director Janet Sciacca said the chamber also held its annual awards dinner to recognize those who made chamber events such as the recent Business and Community Expo, the 21st annual Blue Ridge Barbecue Festival and the 22nd annual Seafood Party possible.

“In the current economy, the chamber of commerce continues to shine as a good strategy for your business,” Sciacca said.

In 2013, the chamber had 50 businesses join versus 45 businesses in 2012. Many of the businesses also entertained a total of 850 guests at the monthly Business After Hours events. The Skip Seaman Volunteer of the Year award went to Pat Martin for her years of service to the success of the barbecue festival, while plaques were also awarded to Philip Edwards and Cindy Walker, who man the merchandise tent and Going Green initiative for the barbecue festival.