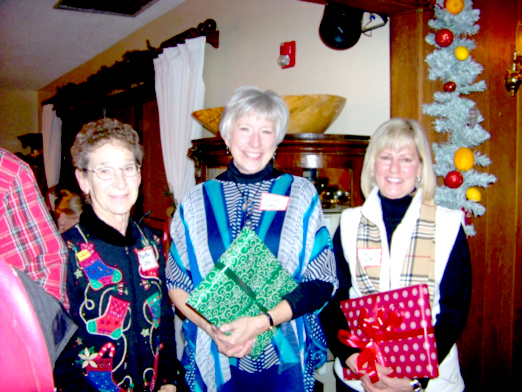 Foothills Equestrian Nature Center had a holiday celebration to thank 2013 volunteers and donors with food and holiday music provided by Fred Whiskin.
FENCE’s Board President, John Boyle presented awards to three volunteers of the year chosen for their outstanding support.
Sandy Sibley moved to this area in 2008 and became involved in TROT shortly thereafter.  The TROT team was waiting on her new doorstep, ready to sign her up.  Sibley has been involved with therapeutic riding since 2001.  She became a PATH, International. Certified Instructor in 2002.  She joined the TROT team as a member of the TROT Advisory Board, and started teaching shortly thereafter.  Upon Norm Power’s retirement, Sibley took over the reins as program director.
TROT is growing and flourishing under Sibley’s leadership, with more participants and volunteers than ever.  FENCE is so very grateful to Sibley and all that she has accomplished and are very proud to have her at TROT.
Sibley has also been on the board of Foothills Humane Society and still volunteers with them.  She sings in the community chorus and is a member of Tryon Painters and Sculptors.
Another much deserved “Volunteer of the Year” award went to Sue Truitt. Truitt moved to this area in 2004, and she has made a huge difference in so many different areas.  We are so fortunate to have her on the FENCE team and applaud her as a volunteer of the year.
Truitt has introduced and managed three open horse shows at FENCE.
She explains, “Open Horse Shows give riders of all breeds, disciplines and abilities an affordable opportunity to participate in a fun, family oriented event.  The Open Shows enrich the equestrian opportunities at FENCE.”
Truitt is a John Lyons certified trainer and is the trainer for the newly formed Polk County Sheriff’s Mounted Patrol. She introduced the first Open Horse Show as a benefit for FENCE  in 2012.  Her police horse, Desi, is a now used with TROT, and Truitt consulting trainer for TROT.  In addition, Truitt in on the Board of Tryon Fine Arts Center and involved especially with Arts in Education.
Our long time standing volunteer of the year went to Martha Love. Love moved to the area in 1989 and shortly after began her work with FENCE by serving on the Equestrian Advisory Committee. She later served on the Board of Directors of FENCE and currently is back on the EAC.
Love is an advanced amateur dressage rider. She has been the volunteer coordinator for the dressage shows forever. She also has been instrumental in assisting with FENCE’s golf tournaments.  Her commitment to FENCE and her hard work are invaluable.
In addition, Love is the past president of Polk County Community Foundation and currently chairs one of their committees.