“Santaland Diaries”: The Elves’ Side of the Story

Santa might get all the sugar-plum hype come Christmas time but, let’s face it, it’s the elves who do the real work over the holidays. 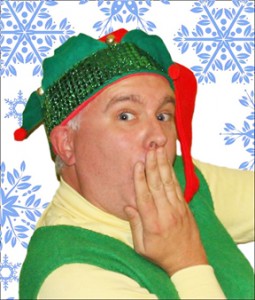 Chris Tinkler as Crumpet the elf

Fortunately for us, comic memoirist David Sedaris gets to tell the elves’ side of the story in “Santaland Diaries,” the uproarious one-man play (or maybe that should be “one-elf” play) performed by Tryon’s own Chris Tinkler in a benefit for the Upstairs Artspace at 6:30 p.m. this Sunday, Dec. 8, at Sunnydale.

In this irreverent classic, Sedaris recounts his misadventures as the disenchanted and jaded Macy’s department store elf, Crumpet.

No matter whether we’re talking about the North Pole or Santa Land at Macy’s – when hoards of bright-eyed kids line up to sit on the big man’s lap, recite their wish lists and pose for the requisite photo op – forget the reindeer, it’s the elves who are the true beasts of burden.

As Sedaris tells it, the elves busy themselves taking tickets, herding fidgety children and their equally impatient parents, snapping photos and handing out the ubiquitous candy canes, while Mr. Claus suffers little more than the indignation of the occasional beard tug as he lounges in gingerbread splendor on his red-velvet throne.

The play was adapted by Joe Mantello from Sedaris’ reading of his holiday classic, which has been an NPR holiday favorite for years, often leaving people stranded in their driveways, doubled over in laughter, unable to turn off their car radios.

“‘Santaland Diaries’ is a riot,” said Upstairs board president Harold Maass, “and Chris brings out Crumpet’s humor and surliness as well as David Sedaris himself.”

So leave your cares and kids at home and join fellow Upstairs supporters at 6:30 p.m. this Sunday, at Sunnydale (334 S. Trade St., Tryon), for the most talked about performance you won’t want to miss.

Tickets include a buffet dinner prepared by Chef Alec Eman of The Orchard Inn.

The menu includes fennel braised chicken, mushroom ravioli and a cream of white bean soup, among other items, as well as dessert and two complimentary glasses of wine or beer. Additional beverages are available at a cash bar.

Special musical accompaniment is by Beth Child on the piano. Front-row tables of eight can also be purchased.

All proceeds benefit the continued fine arts programming of the Upstairs Artspace.