‘Beowulf on a Budget,’ free show at TFAC 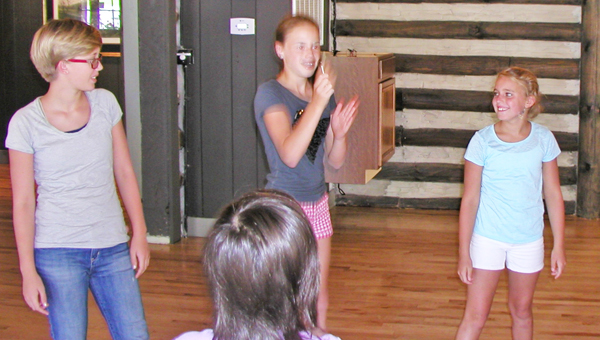 Cast member Reese Alley (center) in rehearsal at Sunnydale for Beowulf on a Budget. The free performances will be held on Saturday, Aug. 3 at TFAC beginning at 10 a.m. (photo submitted by Price Marshall)

Beowulf has long been cited as one of the most important works of Anglo-Saxon literature. “The story of Beowulf is a classic, celebrated and serious epic…but we’re not doing that show,” says director Marianne Carruth.

This adaptation, Beowulf on a Budget, is a comedic take on this classic tale.

The premise for this play is that a thief has stolen all the props and costumes for a small-town theater’s production of Beowulf. In desperation, they gather a bunch of junk and decide “The show must go on!”

What follows is an absolutely hysterical 25 minute production, from the mail armor (literally, armor made of postcards and envelopes) to the jump rope tail of Grendel, the ‘terrifying’ monster.

This show is directed by Marianne Carruth, produced by Sara Seagle, with costumes, props and sets by Lynn Costine.

Assisting this production are multiple community volunteers, including Jody McPherson and three of Costine’s children.

This show has a cast of 20 young actors between the ages of 8 and 12 who are participating in the week-long summer theater camp, presented by Tryon Fine Arts Center (TFAC) and Tryon Little Theater (TLT).

This free performance on Saturday, Aug. 3 at 10 a.m. at TFAC is open to the public. Seats will be given on a first come, first serve basis.