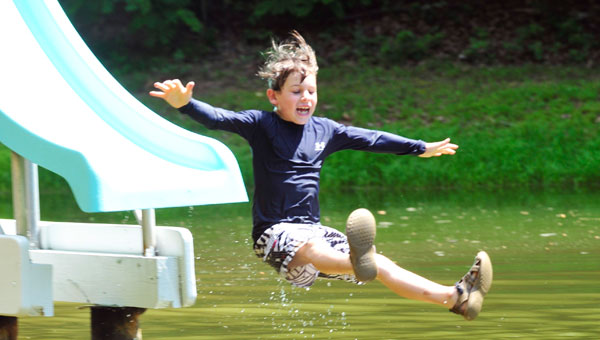 Saluda Community Land Trust (SCLT) board members worked nearly non-stop to prepare the well-known water slide at its Twin Lakes Park for the park’s grand-reopening on Saturday, June 14. Larkin Mraz, right, celebrated his seventh birthday in great style, with several trips down the steep slide and into the refreshing water of the park’s upper lake. See page 4 for the story and more pictures. (photos by Mark Schmerling)

Nearly perfect weather attracted well more than 100 Saluda residents to bask in warm sun, refreshing shade and the enjoyment of swimming, splashing and eating good food at last Saturday’s grand re-opening of Twin Lakes Park.
Youngsters used the steep-pitched and water-slicked slide to propel themselves airborne, splashing into the shallow water of the upper lake.
Parents and children frolicked in the lake, while others relaxed on and near the beach.
The park is owned and operated by Saluda Community Land Trust (SCLT).
The event, which was free of charge, opened the park so residents could see and enjoy the improvements at the 21-acre site. The park also features wooded hiking trails.
To keep traffic light, SCLT ran two shuttle vans between Saluda Fire and Rescue on Greenville Street, and the park, less than 2 miles away. Visitors enjoyed free barbecue, cold drinks and snacks.
“I think it went well. I think it got a lot of interest,” summarized SCLT President Nancy Barnett.
According to Barnett, officials estimated that some 100 to 150 individuals took advantage of at least part of the five-hour event.
The re-opening was the culmination of a long effort by SCLT board members and local contractors, who worked for several months or more to add safety features and to provide a more welcoming atmosphere. Revisions on the upper lake are complete; work on the lower lake continues.
“It’s what it’s all about, right here,” said SCLT board member Dave Prudhomme, who witnessed the park’s transition in recent months. “This brings it back to life.”
Twin Lakes Park is open to the public by reservation only.
Those interested in reserving the facility for a half or a full day, may contact SCLT at 828-749 1560. SCLT officials may also be reached at www.saludaclt.org.