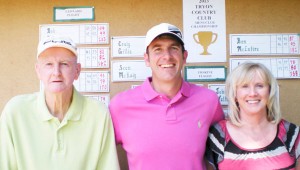 Benji McCall with his mother, Cindy and his grandfather, Cecil Turner.(photo submitted)

Benji McCall wrestled the TCC Men’s Club Championship away from Fred Edwards Jr. by posting two rounds of 73-70 = 143 to win by five shots over Johnny Walker (overall runner-up).
Edwards was third with a 150. McCall is the grandson of former TCC professional Cecil Turner.
In the Leonard Flight, Jeff Raines won with a two round score of 162 over Tom Solomon with a 162. In the Erskine Flight, Johnny Walker took first at 148 and second was Gary Laughter with a 156. In the Ross Flight, Edwards Jr. took first with a 150 and second went to Tommy Gardner with a 151.
– article submitted by Marc Brady