Discover Polk County’s role in the founding of the country 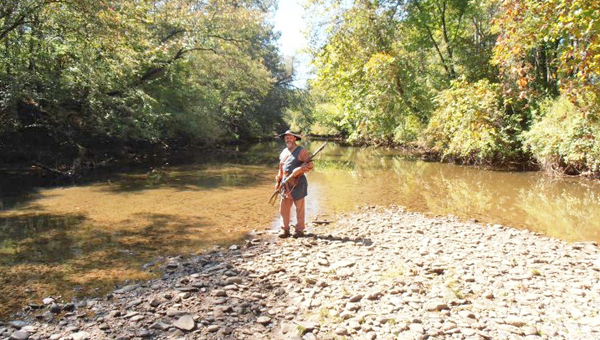 Pictured above is Park Ranger, Ashley Barrows, who is the son of Rev. Bob Barrows, Minister at the Congregational Church UCC on Melrose Ave. in Tryon. Barrows is standing in the spot where the Overmountain Men crossed the Green River. (photo submitted)

The Overmountain Victory National Historic Trail (OVNHT), in cooperation with Polk County, North Carolina is pleased to announce a guided walk along a certified section of the Overmountain Victory Trail this Saturday, June 8th.   Park Ranger Ashley Barrows, a seasonal employee in the park service for OVNHT and Cowpens National Battlefield, will lead the walk which will examine the Southern Campaign of the Revolutionary War and the local region’s role in securing independence from England. Special focus will be given to the story of the Overmountain Men, who travelled along this exact trail in Polk County on their way to Kings Mountain.

In September of 1780, over 1000 back country patriot militia men from Virginia and present day Tennessee, marched across the Blue Ridge Mountains to attack Major Patrick Ferguson and his army of British loyalists. After crossing the mountains, the men arrived in the Morganton area where they were joined by 350 militia men from Surry, Wilkes and Caldwell counties. They continued on heading south and camped at Alexander’s Ford on October 5, 1780.  While there, they learned of Ferguson’s march towards Charlotte, NC and altered their route the next morning to chase after him. The following night, while camped in a field that would later be the site of the Battle of Cowpens, the Overmountain Men learned of Ferguson’s location on the top of Kings Mountain. The men set off overnight to fight what would be one of the defining battles of the American Revolution.