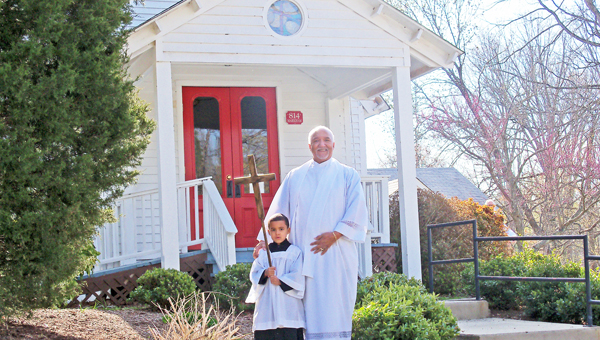 Ivan Cunningham doesn’t fuss as his aunt Angela gets him ready for church on Sunday mornings. He doesn’t grumble as she wakes him or complain when Father Walter Bryan picks him up.

No, Ivan knows the congregation of Tryon’s Good Shepherd Episcopal Church relies on him.

“He excitedly tells me on Friday, ‘Man, I’ve only got two more days until church on Sunday,’” Angela Cunningham said.

As the service concludes each Sunday, his young voice calls out to the, “Go in peace to love and serve the Lord. Alleluia, alleluia.”

As an acolyte Ivan carries the cross, which is almost as big as he is, as he leads the reverend and the procession into the church. He also breaks the bread for the congregation.

“I refer to him as Ivan the great. He’s quite an impressive young man,” Father Bryan said. “I often say, ‘I took him under my wings,’ but he’s really taken me under his wings.”

Ivan took over the role of acolyte somewhat by chance. Bryan said when Ivan’s aunt Angela had to have surgery more than a year ago, he asked Ivan if he wanted to keep coming to church. Ivan did, so Bryan began picking him up each Sunday.

Father Bryan said while he was busy fulfilling his duties, he needed something to occupy Ivan. This led to Ivan taking on a list of responsibilities.

Before the church starts into the Eucharist Ivan goes out with Father Bryan to shake hands and greet people. During the Eucharist he stands right beside Bryan. Ivan is even responsible for passing the wafers on to Father Bryan.