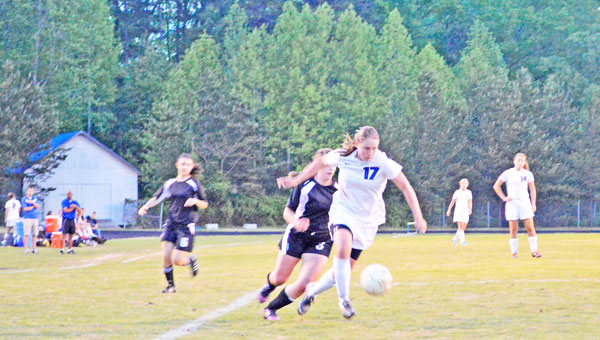 No. 17 Megan Clements races toward the goal with an Owen defender trailing her. Despite effort from numerous players, the Lady Wolverines couldn’t find their way behind Owen to score. (photo by Chris Hurst)

Following a 0-2 loss to Owen on Monday night, April 29, today’s game becomes a must win for Polk County.

It was a tough blow for the Wolverines, coming off a 3-0 victory against Mitchell Thursday, April 25. 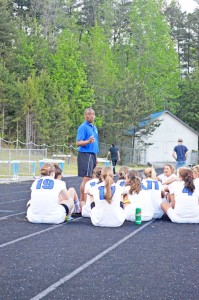 “Owen was just better tonight,” Charles said, “although we did better in the second half, in the first half, Owen would beat us to the ball almost every time.”

“Whenever Owen turned the ball over, three defenders would automatically drop back, making it extremely difficult for us to get any shots off,” Coach Charles said. “Last time we played them, we were able to get behind them easily. They took steps tonight to make sure that didn’t happen.”

Despite the loss, aspects of the game and the Lady Wolverines’ effort pleased Coach Charles.

“Talia Petoia isn’t a starter, but whenever she goes in she really gives it her all, and she did that tonight,” he said. “She helped out all night. I didn’t sub her out in the second, because she has a great energy and she gave us a lift tonight.”

Jordan Geer was out with a concussion, and Samantha Firby had to leave the game during the second half.

“We think it was just over-exertion with Sam tonight,” Coach Charles said. “She was really effective when she was out there, she was causing all sorts of problems for Owen, and it hurt when she came out.”

Charles said he hopes the team takes away enough from the loss to be prepared for Hendersonville.

“Winning the conference is still in our sights, but only if we do our part first,” coach Charles concluded, “tonight was better than any practice we could have done on our own, and hopefully it’ll help us get ready for Hendersonville.”

Polk’s games against Hendersonville will be played at different times than previously reported. JV will kick off at 4 p.m., with varsity following at 6.