Sunnydale can now proudly proclaim its National Register of Historic Places status. Two plaques were recently added to the front entrance through a grant from the Polk County Community Foundation, which also allowed Tryon Little Theater (TLT) committee members to complete restoration of the building’s flooring, as well as purchase a new sound system, kitchen enhancements and safety railings for the stairs. 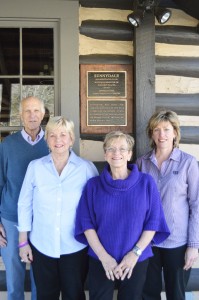 The two plaques signify that Sunnydale is now included on the registry and provide a bit of history of the building, “Sunnydale was built for Harold Shelnutt in 1930 as a community social hall. It was restored in 2011 and donated to the Tryon Little Theater by Bob and Jackie Lane.”

The Lanes gifted Sunnydale to TLT in December 2012. The Sunnydale committee, headed up by Rebecca Davis and Susie Kocher, has worked through the $13,300 PCCF grant to further enhance Sunnydale.

“It gave us the opportunity to outfit so many things in the building that make it more user friendly, so we can open it up to more events without upkeep being so difficult,” said Davis.

Davis said the energy sparked by the Lane’s gift has captured the community’s interest.

“When we first got [Sunnydale] we thought we would take our time but we got a call the next day from someone wanting to rent it,” she said.

A lot of the community feels like it’s their building too, Davis added, because TLT is such a part of the community. They take ownership because of their fond memories of the historic building.

Davis’ own great-grandparents retired to Tryon in the 30s, so she heard her mother talk about them attending events at the social hall. When Davis’ family moved here she created her own memories through proms held at Sunnydale and the dinners and dances her own parents attended.

“It’s always been there – it’s never changed and you can’t say that for many places now,” Davis said. “It was literally falling down … so it’s great to see that it’s going to be standing for another 100 years exactly as it is.”

“The board of TLT and the Sunnydale committee believe that making Sunnydale available to our community at an affordable rental rate is part of the vision that Bob Lane has for Sunnydale,” Kocher said.

For information about renting Sunnydale, contact Tryon Little Theater at 828-859-2466 or visit www.tltinfo.org.

Rose to perform for Heather Cash benefit May 4