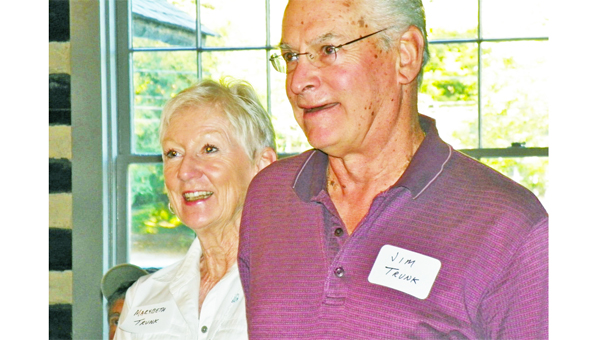 Jim Trunk (shown with his wife MaryBeth) was recently inducted into the Second Wind Hall of Fame. (photo submitted)

Jim Trunk recently became a member of the Second Wind Hall of Fame, having been nominated by Thermal Belt Habitat for Humanity.

Second Wind provides recognition for retirees 60 years and older for outstanding volunteer work in area organizations that exemplify the concept that retirement need not be the end of a productive life of service to others and their community, but a “second wind” of opportunity to serve mankind.

Jim and his wife, MaryBeth, have lived in the area since 1997. They moved here from Michigan where Jim was comptroller for Michigan Bell. They have three children and 10 grandchildren.

Since retiring, Jim Trunk has been very active volunteering in various community organizations including Thermal Belt Habitat for Humanity, where he has been on the construction crew for 14 years.

He has also served on the Tryon Fine Arts Center Board of Directors, the Polk County Community Foundation Finance and Education Committees, and is past President of the Children’s Resource Outreach of South Carolina at Cliffs of Glassy. He volunteers as a Heritage School tutor in Travelers Rest and is an active member of the Knights of Columbus.