Editor’s note: This article is  another in a series about plant species in Polk County. The Pacolet Area Conservancy (PAC) and David Campbell will provide 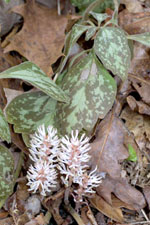 information about one particular plant species each month. They ask residents to let them know if they can identify where the “most wanted plant” described each month can be found in the area.
The Pacolet Area Conservancy (PAC) and David Campbell have identified this month’s Most Wanted Plant” – Pachysandra procumbens, also known by the common names mountain spurge, mountain pachysandra or Allegheny spurge, to name a few.
In North Carolina, Pachysandra procumbens is considered to be disjunct from its typical distribution, west of the Blue Ridge in the Ozarks. It is one of several species that have been found in Polk County and nowhere else in North Carolina (that we know of). Oliver Freeman first described the species in Polk County in the mid-1900s, stating that the species had been found in four locations in the Green River Valley of the Piedmont.  A specimen is housed at the herbarium at UNC Asheville.
Pachysandra procumbens is technically an evergreen “sub-shrub,” an herb having a woody lower stem, although it behaves like an herbaceous perennial. It prefers to grow in moist rich woods. Although this native plant will not be in flower right now (it blooms in March-April), it can be identified by the leaves.  The leaves are 3 inches long, slightly pubescent (covered with short hairs), ovate (egg-shaped, with the broad end at the base) in outline, alternate, toothed and mottled with milky white splotches.
If landowners think that they have this species growing on their property, or know where it might be located, please contact PAC at 828-859-5060, or e-mail comments, questions or photos to landprotection@pacolet.org.
The purpose of this project is to gain a better understanding of the flora in Polk County and documenting the species present in the county, making sure that the flora of Polk County is well represented in state records and herbaria. The only extensive floristic study in Polk County was conducted in the 1950s and 1960s by Oliver Freeman.
– article submitted
by Pam Torlina