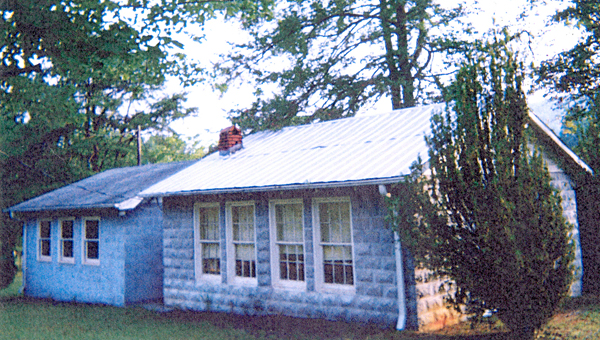 The Stony Knoll Community Library in Mill Spring will celebrate 75 years of service to the community and county on Saturday and Sunday, Sept. 15-16. On Saturday, Sept. 15, an open house at the library complex will be held from 2-4 p.m. On Sunday, Sept. 16, a service of celebration will be held at 4 p.m. at Stony Knoll CME Church in Mill Spring. A reception will be held immediately following the service at the Stony Knoll Community Center.
Founded by Della Jackson on Aug. 24, 1937, Stony Knoll Community Library is unique in that it is the first and only institution built by African-Americans for African-Americans in North Carolina in the 1930s. Jackson’s major goals were to promote literacy and to encourage a better way of life.
The library was an outgrowth of an adult class funded by the WPA in 1937. Classes were held in a room rented (for 50 cents weekly) in the home of Rev. J.D. Jones, the pastor of Stony Knoll CME Church. The students, who were eager to learn, wanted to share their books with others. As books and magazines were donated, they shared to start libraries in the six black schools in the county. These books supplemented the worn and outdated textbooks available to black students at the time.
Meanwhile, nickles, dimes and dollars were collected to purchase acreage for a building. When it became known what the organizers were trying to do, a white benefactor, Russell Walcott, helped to purchase the land. After that, the community held hot dog sales, “singings” and recycled many items (before recycling became popular). Old clothing went to Greenville, S.C.; metal newspaper and corrugated boxes to Spartanburg, S.C.; glass bottles to Asheville, N.C. and tin and aluminum cans to Dana, N.C.
Finally, the community was ready to build the library, a modest room constructed of hand-molded faced cement blocks. A machine that made rock-faced cement blocks one at a time was rented from Isaac J. Mills. Robert Tryphonia Hayden and Jesse Lynch made the blocks, which were then laid in the sun to dry.
Clarence Thompson and a nephew, James Hayden, laid the blocks, although Thompson was a carpenter, not a brick mason.
Robert King blow-torched the inside, which added a decorative touch to the interior.
Now used mainly for reference work and as a museum, the library served its purpose in its day. Many lives were touched by the exchange of books, magazines and toys. In addition, under the umbrella of the library, supporters built a community center (1960), created the Mason Merrill Conference Room (1986) in honor of a major benefactor who donated money and his personal library, and started a black heritage museum.