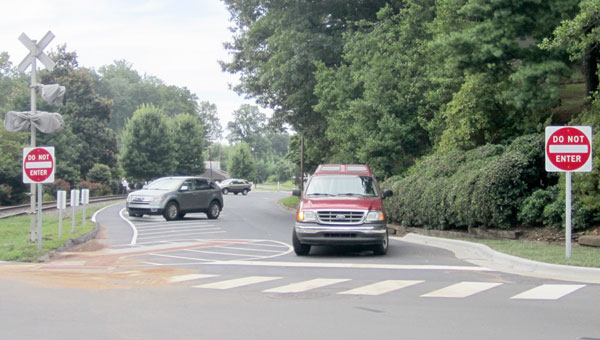 McCown Street at the intersection with Pacolet Street in downtown Tryon. McCown is now open again after being closed for workers to change the street to one-way northbound (toward Pacolet Street) and to add diagonal parking spaces. (photo by Barbara Tilly)

Infrastructure upgrades to Tryon’s McCown Street were completed this past week, and the local thoroughfare opened to traffic late on Friday.

The major change has been to designate the street a one-way road, with northbound traffic. This shift required that drivers now be allowed to make left turns onto Pacolet Street from Trade Street, a long-wanted change for many residents. The North Carolina Department of Transportation (NCDOT) is undertaking a traffic study to determine whether to install a new traffic light with a turn arrow to avoid potential traffic back-ups.

In addition, 20 new parking spaces have been created, including several motorcycle spaces.

“This past weekend proved how useful the new parking will be to our citizens,” Armbrust said, “as all spaces were filled both for the Tryon Theatre movie showing and the Upstairs Artspace exhibit opening.”

Green space has been created at both entrance and exit ends, with a landscaping element also at the center along the Oak Hall Embankment. Landscaping was provided by Sammie Qualls and crew.

That planting area will soon contain a historical plaque recognizing an important colonial Tryon detail.  The text reads: “The landmark Cherokee Boundary (1767), negotiated by Colonial Governor William Tryon and Cherokee chiefs, passes above McCown Street, with the line running from Tryon Peak to the Reedy River in South Carolina.”  This boundary line marked the westernmost point of the then United States. The two supporters on either side of the signage replicate Gov. Tryon’s coat-of-arms – six gold stars curvy on a blue field divided with a gold casselated bar.

Tryon officials said they hope to install a pedestrian walkway over the rails in the near future, providing better connectivity from McCown to South Trade Street.

Permission requests for the walkway have already been sent to Norfolk Southern Corp. This walkway is to work in tandem with a mid-block pedestrian crosswalk located across from the Tryon Theatre and Upstairs Artspace, a project being facilitated by the NCDOT.

“Tryon’s downtown Streetscape III improvements are in high gear at present,” Armbrust said. “Preparations are under way, too, for, among other things, the next sections of sidewalk and, of course, the Tryon Depot Plaza project, funded through our North Carolina Main Street Solutions Fund (MSSF) grant.”

The Town of Tryon acknowledges the contributions of the Tryon Downtown Development Association’s Streetscape Master Plan (2001), the Polk County Community Foundation, Milone & MacBroom, Norfolk Southern Corporation and the NCDOT for their efforts to make the infrastructure improvements possible at New Market, South Trade and McCown streets.

For information about how you can participate in downtown Streetscape improvements, contact Crys Armbrust through the Town of Tryon at 828-859-6655 or carmbrust@windstream.net or contact Steve Cobb through the TDDA at www.downtowntryon.org.