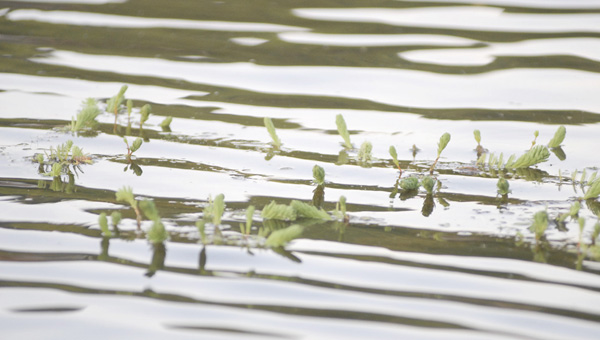 Above and right: Parrotfeather algae growing in Lake Lanier. Lake property owners have expressed concern about the abundance of the weeds and algae. (photo above by Leah Justice; photo right by Jerry Atkins)

Lake Lanier property owners said they have noticed a problem with algae and weeds growing around their boat docks this summer.

Tryon Town Council discussed the problem on June 19 with lake property owners who asked the town for help.
The lake has experienced similar problems in the past with algae.
Tryon Public Works Director Joel Burrell said in 2006 the town spent money to take care of the algae with carp. According to lake residents who have been researching the problem and speaking with experts, there are three types of algae in the lake currently: parrotfeather, variable-leaf pond weed and chara.
Lake Lanier Civic Association (LLCA) President Allen Smith said he’s been talking to a South Carolina specialist and there are approved chemicals for reservoirs. He said one problem with carp is they will eat the younger species of algae but not the larger, older algae.
Council members did not express interest in putting any type of chemical in the town’s drinking water source.
Tryon Mayor Alan Peoples said the carp needs to be sterile so they don’t kill out recreational fish.
Burrell said carp are effective on the algae, but many carp are needed. He said the carp are $11 each.
Lake residents, including Jerry Atkins, have been in contact with specialists in the state, including W. Cory Heaton, Agriculture and Natural Resources Agent, Clemson Extension Service. Heaton verified that two of the species sent to him as samples were variable leaf pondweed and parrotfeather algae. Heaton said he has spoken with several colleagues who have seen parrotfeather growing in great depths of water. Heaton also said a North Carolina colleague has been able to obtain control of the weeds using a stocking rate of 40 grass carp per one acre of vegetated area.
One of the problems may be determining how many acres are affected and exactly where to stock the carp.
Another issue discussed at the council meeting was who is going to pay for the carp.
Councilman Roy Miller said he’d like to see if the state of South Carolina would consider contributing some carp.
Councilman George Baker said he’d like to see the LLCA come up with some money, because the town cannot tax lake residents. 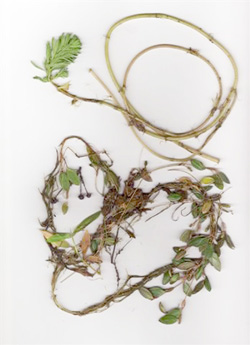 Right: Two of the samples of Lake Lanier algae and weeds sent to the Clemson Extension Service. The top sample is parrotfeather algae, and the bottom is variable leaf pondweed (photo by Jerry Atkins)

Tryon attorney Bailey Nager suggested the town contribute a certain amount of money to the project and the ask homeowners to contribute the remaining costs.
The town owns the lakebed, located just across the state line in South Carolina, and draws water from the lake as its main source of drinking water. Tryon officials have struggled for years over enforcement of lake zoning because of the costs of enforcing an area that doesn’t contribute to the town’s tax base. Another issue regarding the lake is the lack of enforcement of regulations for recreational activities, as South Carolina Wildlife ceased boating enforcement several years ago.
Councilman Doug Arbogast said he’d also like to see property owners contribute to the cost of the carp. He has mentioned in the past as well as last week his concern that Tryon taxpayers pay for costs associated with the lake but are not allowed to use the lake. Lake Lanier is private and restricted to property owners.
Council decided to review studies and costs regarding the algae and solutions to the problem. The town will likely discuss the issue again at its next meeting, scheduled for Aug. 21.