‘Distraction’ filming to start in Landrum 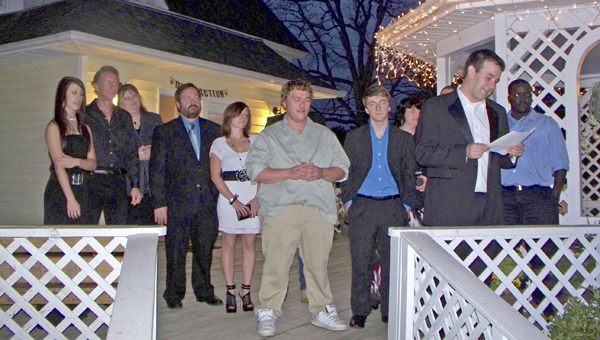 City leaders, businesses throw support behind production
Production in Landrum for the pilot sci-fi series “Distraction” kicks off this Sunday, April 15 and runs through next week. Crews hope to wrap their last shot April 22.
“The greatest support we have gotten has been from the City of Landrum,” said producer Matt Stevenson. “The City of Landrum has been phenomenal – the mayor, the chief of police. When you come into someone’s city and they welcome you with open arms and offer you anything they have or anything they can do for you  – it’s just extraordinary.”
Scenes will be shot over this week at a variety of locations in Landrum, including shots along East Rutherford, on rural roads, at Expressions Florist, at Landrum airport and at a local doctor’s office.
Stevenson said some of those days will just take five or more hours, while shooting next Friday for scenes from a barn dance will keep cast and crew on set from 6 a.m. to close to 1:30 a.m. the next morning.
“We’ve got a lot to do in a week, but we’ve got a really good crew and a really great cast,” Stevenson said. “We want to get out there and get this thing filmed and see how far we can take it.”
How far they take it doesn’t necessarily mean they want filming of the series ever to move from South Carolina to Hollywood. In fact, Stevenson said the crew and writer, Jeff Prince, in particular, want filming of the series to occur in Landrum.
“We want to give back to the city of Landrum – we want to keep everything here and when it does get picked up by a network we want to keep it here,” Stevenson said.
That’s great news to Expressions Florist owner and Landrum Area Business Association president Melanie Jennings, who has worked for the last few months helping Prince and Spartanburg production company Green Giant Media line up vehicles, signage and locations for filming of the pilot.