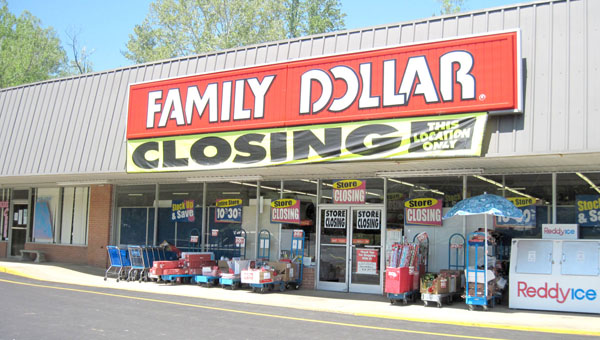 The Family Dollar in Tryon Plaza on Hwy. 176 is expected to close on May 19. (photo by Samantha Hurst)

Employees of the Family Dollar on Hwy. 176 in Tryon expect to ring up their last sales Saturday, May 19.
Signs went up late last week across the front of the building and at the road stating, “Closing – this location only.”
Cindy Crawley grew up shopping at the store and now works there.
“I think our customers are all very, very sad. The people who come here are regulars who sometimes come in several times a week. We know them by their first names and they run into people they know here,” she said.
The Tryon Family Dollar opened in the Tryon Plaza in the mid 1960s, as one of the first stores in the shopping center.
Pat Linnon, originally from Greenville, S.C., began shopping at the Tryon location when her family visited Lake Lanier on vacation.
When she married in the 1970s, she and her husband visited her mother-in-law on the lake and regularly stopped at the Family Dollar. Even when she moved to Columbus five years ago, she continued to shop there.
“It’s one of those family connection things,” Linnon said. “Rose, the manager, has always been the ‘family’ in the Family Dollar, as far as I’m concerned. They always want to know how you are doing and what is up with your life.”
Crawley said she began shopping at the store when she was 8, just after her family moved to the Tryon area. She said she would often go there to find gifts for Mother’s Day. Later, she would drop in as a teenager to find a shirt to wear out for the weekend. As an adult, Crawley has worked at the store twice – once for two years about two decades ago and again for the past two years.
“The hard part is going to be coming off the lake and it not being there,” Crawley said. “I do understand from the business side of it the store is there to turn a profit, but it’s just an emotional loss.”
A sign on the entrance lets customers know they can still shop at the Columbus location, which is not closing.
Family Dollar was originally founded by Leon Levine in 1959 in Charlotte and, according to its website, currently includes 6,800 stores in 44 states.