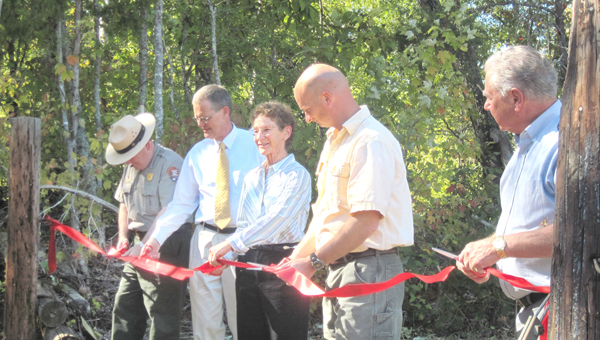 Park expected to open this summer
The Polk County Board of Commissioners on Monday, April 2 approved a contract bid to construct park improvements at Alexander’s Ford at Bradley Nature Preserve. Commissioners chose the low bidder of Thompson Construction for $111,980.
Commissioners also approved the project budget ordinance.
The county-owned park was obtained and will be improved completely through grant funding totaling $1,439,799.
Project manager Ambrose Mills said he hopes the park will be open to the public by July, as the construction deadline is in June because of grant requirements.
County and construction officials will hold a pre-construction meeting today, Monday, April 9, with construction expected to begin within two weeks.
Improvements to the 163-acre nature preserve include the creation of two trails, one that will be approximately ½ mile long and will meet Americans with Disabilities Act (ADA) standards. The other trail, approximately one mile long and known as the main trail, will be located along a current logging trail and will be left natural. Another trail will be available that will need no improvements and will also be natural.
The ADA-compliant trail will be 6 feet wide and is estimated to cost $35,240.
“The ADA trail is the most expensive and hardest to construct but we want the handicapped trail to give the same experience as the other trails,” said Mills.
Other improvements that will be made include creating an access road and parking, demolishing an existing barn, creating signage and a kiosk, constructing an open-air picnic area, creating a picnic area with two tables and trash receptacles, and other work such as mulching and sedimentation controls.
Commissioners thanked Mills for his work on the project, especially in getting enough funding that no county money will be needed.
In addition to the donated land (valued at $377,500), grants were received from the Clean Water Management Trust Fund ($274,000), the N.C. Heritage Trust ($200,000), the N.C. Parks and Recreation Trust Fund ($500,000), the Polk County Community Foundation ($18,000), the Bradley Fund ($80,000) and U.S. National Park Service Grant ($20,299).
Polk County’s vision for the property is to create a nature preserve that will be low maintenance and low cost to the county.
The land is situated along almost a one-mile stretch of the Green River and includes part of the Overmountain Victory National Historic Trail, which follows the route of assembly of the American Patriot Army. That army decisively defeated an American Loyalist army at the battle of Kings Mountain, S.C., in the fall of 1780.
The trail was certified in October 2011 as part of the Overmountain Victory Historic Natural Trail.