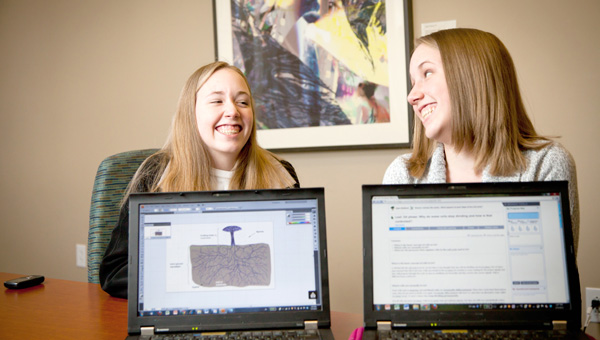 Wake Forest sophomores and twin sisters Jessica and Tiffany Blackburn of Columbus provide unique support for a Ph.D-level project aimed at creating an interactive biology e-textbook for students.
“I really like the idea of changing the way that biology textbooks are written,” Jessica Blackburn said. “They are so difficult to understand and in my opinion contain so much unneeded information. I wanted to make it so that biology textbooks actually helped you.”
Jessica had heard about the project from her first semester biology teacher during her freshman year. After assisting professors the next summer in editing and even writing many of the BioBook’s chapters or leafs, Jessica brought on sister Tiffany – a biology major and art minor – to provide illustrations for the varied subject matter.
“It was a really cool project and I realized there were a lot of opportunities to use pictures to explain the concepts, plus I’m a big advocate of Tiffany being able to use her art skills and her biology interests,” Jessica said.
The two work to make biology subject matter, from genetics to fungi, easily understandable for the average student.
Tiffany said she understands the vital need for visual learners, like herself, to see an example of the concept they are studying.
“The illustrations help you visualize how the concept relates to reality,” Tiffany said. “With drawing I always draw animals and people. So with things like biology I was able to take that one step further by drawing the examples, which helped me understand them. For me, it always helped me remember what I was learning better, as well.”
When she needs to better understand the analytical side of things, she turns to her sister and collaborator for assistance. They both agree it’s been a great partnership.
The Polk County High School graduates have shared a love of biology, and science in general, since middle school.
Middle school teachers Mr. Brumley and Mrs. Newton, now retired, inspired the Blackburn twins’ scientific passion. That inquisitiveness was further fostered, they both said, by Mrs. Allsbrook at the high school.
“They made science really fascinating and interesting, so we’ve been science buffs ever since,” Tiffany said.
Jessica agreed that living and going to school in Polk County only enhanced her curiosity of the subject.
“Science contains so much information about living organisms,” Jessica said. “Studying anatomy, you learn how your body works. Studying ecology, especially when we lived in Polk County, you could look all around and see these things happening right around you that you were learning about in the classroom.”
Jessica started her education at Wake Forest already passionate about helping her peers better understand biology, especially as she watched them struggle. She said the project has further encouraged her to consider teaching as an option later. It’s also made her consider pursuing additional degrees in the field because, as she said, she’s “never going to know enough to be satisfied.”
Tiffany, meanwhile, has realized there might be a real way to merge her two passions – biology and art.
“I really enjoy it and it would be my best-case scenario if I could find a job that could merge both biology and art,” she said.
Tiffany added that she’s learned a lot about many companies that illustrate for textbooks so it has given her a whole new career possibility.