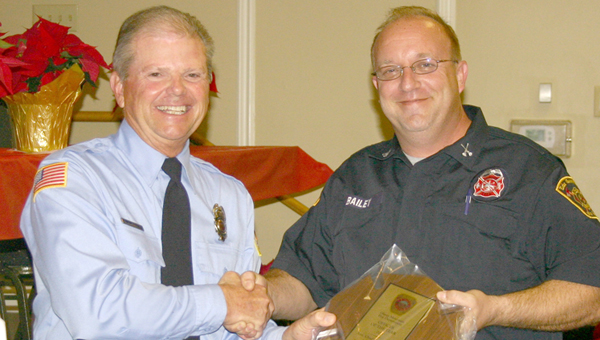 The Glassy Mountain Fire Department recently named its 2011 award recipients for service to the community.
The Officer of the Year award was presented to Assistant Chief Bryan Bailey of Landrum, and the Cadet of the Year Award was presented to Hunter Ward of Landrum. The Troy Cecil Pruitt Firefighter of the Year awards were presented to Evan Campbell of Greer, S.C. (Volunteer of the Year award) and acting captain Jason Sprouse of Travelers Rest, S.C. (Career Firefighter of the Year Award). The awards were presented by Chief Bryan Riebe and John Ball, chairman of the awards task force, during Glassy Mountain Fire Department’s Annual Awards Banquet.
“We are very proud of all our firefighting staff both career and volunteer, but we are always in need of more volunteers – firefighters and first responders – especially because of the size of our district,” Chief Riebe said. “However, many folks may not know that we also need help from citizens who can provide support to the district, such as mechanical, electrical, technical, legal assistance, etc – it doesn’t have to be fighting fires. If anyone wants more information on how to become part of our team, they should contact me at 864-895-4306 or go to our website at www.gmfd.net. We have many job opportunities available other than fighting fires.”