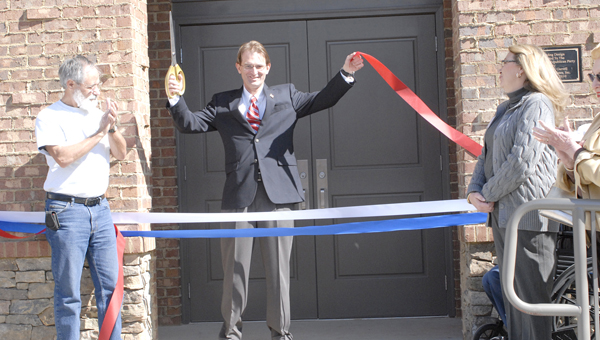 About 200 attend grand opening
The new Polk County Republican Headquarters building is officially open after a grand opening ceremony that drew approximately 200 people on Saturday, Feb. 25.
Polk County Republican Party Chair Debbie Arceneaux said, “It’s been a long time coming,” referring to the 26 months and two weeks the party went without a building.
The crowd toured the new facility, located on Peak Street in downtown Columbus, and viewed photographs of the building process on two flat-screen televisions located in the conference room of the building. The new building is also equipped with a kitchen area, restrooms and a separate meeting room.
Those who attended the grand opening were treated to a hot dog lunch and desserts.
The grand opening also included ribbon cuttings, a prayer by James Metcalf, the pledge of allegiance by local veterans and the national anthem sung by Karen Lawrence.
Arceneaux, building committee chairman Scott Woodworth and building designer Michael Garrell each cut one of the three separate red, white and blue ribbons.
The new headquarters was completed recently following a ground breaking in September 2011. The steel building with brick facade was initially scheduled to be completed by the end of the year, but weather delayed the project.
The new headquarters was built after the previous headquarters building was condemned because of a roof collapse following a December 2010 snowstorm. The former building was torn down, and the new building was constructed on the same lot in a different position to allow for parking in the rear.
The original building was constructed in the 1950s-1960s as a post office.
Polk Republican officials said they built the new building to give local Republicans and the community a building to hold meetings and other community functions. 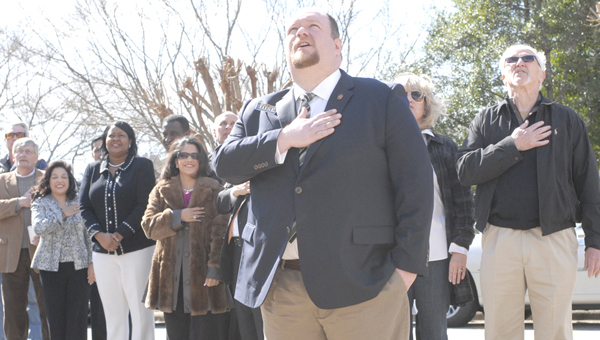 Veterans and a crowd said the pledge of allegiance and Karen Lawrence sang the national anthem at the grand opening of the new Polk County Republican headquarters building in Columbus. A crowd of about 200 people attended the event, which also included a ribbon cutting and hot dog lunch. (photo by Leah Justice)