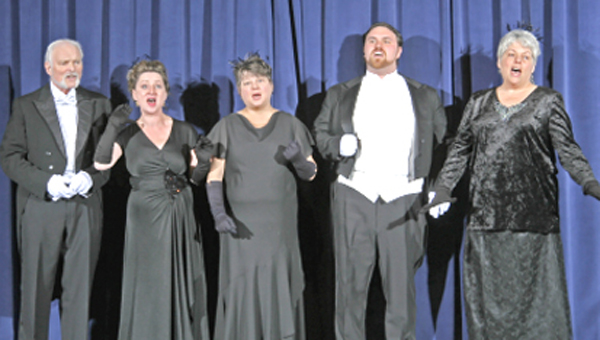 The Liebeslieder Singers warm up in Tryon Little Theater’s production of Stephen Sondheim’s “A Little Night Music.” The group acts as a Greek chorus, commenting through song on the actors, their lives and their romantic choices. From left: Ed Richardson, Petra Harrelson, Rebecca Davis, Josh Moffitt and Connie Fry-Cedervall. (photo by Lorin Browning)

The 63rd season of Tryon Little Theater (TLT) continues with Stephen Sondheim’s musical, “A Little Night Music,” opening Friday night at Tryon Fine Arts Center.
Sondheim wrote the lyrics and music, and together with Hugh Wheeler’s book, the drama was inspired by the 1955 Ingmar Bergman film “Smiles of a Summer Night.” The original Broadway show opened in 1973 and won many awards, including a Grammy award and six Tony awards.
The story takes place in early 1900s Sweden, and the various story lines intertwine as the characters are faced with opportunities to study their own relationships. A middle-aged lawyer, seemingly happily married to his much younger wife, encounters his former lover, while the lawyer’s 19-year-old son is in love with his 18-year-old stepmother. A married count has a mistress, but gets jealous when he thinks that his wife has taken a lover. A beautiful actress, after seeing her former lover, realizes she is tired of her married lover. A devoted wife allows her husband to complain to her about his mistress.
Although the characters’ stories seem to superficially twist and turn through sexual encounters, each character finds himself in a deep and serious confrontation with his own true feelings about his relationships. And all of these events and characters are watched by the matriarch, reliving her memories, and her young granddaughter, full of hope for her own future.
The play is full of music, sung by actors drawn from Polk County, Landrum, Spartanburg and Greenville.
The score’s most recognized song, “Send in the Clowns,” was actually written at the last minute and in a few hours to give Desiree a strong song in the second act.
In a 1990 “Live from Lincoln Center” interview, Stephen Sondheim explained, “I wanted to use theatrical imagery in the song, because she’s an actress, but it’s not supposed to be a ‘circus.’… It’s a theater reference meaning ‘if the show isn’t going well, let’s send in the clowns’; in other words, ‘let’s do the jokes.’ I always want to know, when I’m writing a song, what the end is going to be, so ‘Send in the Clowns’ didn’t settle in until I got the notion, ‘Don’t bother, they’re here’ meaning that ‘We are the fools.’”
The 19 actors are joined by a host of local talent to bring this production to the stage. From set designers and builders, to costumers, to members of the orchestra and stage crew, the production has been a team effort.
“We at TLT are always so grateful to the many, many people who help us create shows,” said Rebecca Davis, TLT president. “There are so many details that have to come together, in the right place, and at the right time. Richard Sharkey, director, has pulled together a marvelous cast and the support staff, of mostly volunteers, has been there every step of the way. We are pleased with this production.”
Performances will be at the Tryon Fine Arts Center on Melrose Avenue, Feb. 17-19 and Feb. 24-26. Show times are 8 p.m. on Friday and Saturday evenings and 3 p.m. on Sundays.
To purchase tickets or for more information, contact Tryon Little Theater at 828-859-2466, Monday–Saturday, 10 a.m. – 1 p.m. The TLT box office is at 516 South Trade, Tryon.
– article submitted
by Mimi Alexander