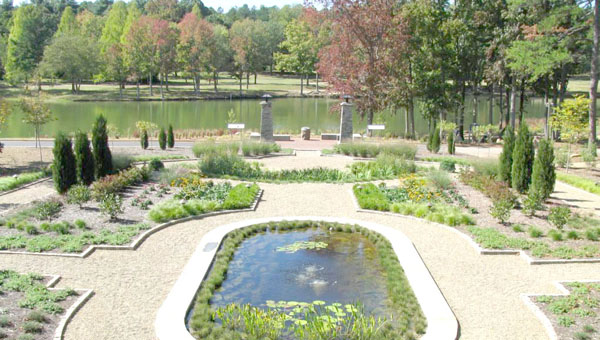 Landscaping designed by Mark Byington at the Cliffs Cottage on the Furman University Campus in Greenville, S.C. (photo submitted by Robin A. Edgar)

Driving around the Upstate, it shouldn’t be difficult to spot some of the creative handiwork of local landscape architect Mark Byington. A Tryon resident since 2000, he has been responsible for beautifying some of the area’s most prestigious institutional and public facilities such as the Spartanburg’s Wofford College and Roger Milliken Center, as well as the Greenville-Spartanburg International (GSP) Airport and the RiverPlace condominiums in Greenville.
Born in Ohio, Byington moved to Greenville, S.C. with his parents when he was 10 to be close to his grandparents, who lived in Spartanburg County. A student of nature as a young boy, he loved to learn about plants, rocks, animals and natural systems. Coupled with an inherited familial gift of illustration from his paternal grandmother, that interest made it logical to pursue a bachelor’s of landscape architecture.
“My eldest brother suggested the field of landscape architecture, a profession one of his high school classmates had pursued. It was a perfect match for me,” said Byington.
After graduating from the University of Georgia in 1983, he lived in Greenville, where he worked with several multi-disciplinary design firms for seven years before starting his own firm, Byington Landscape Architects. During that time, he was part of a design team that worked on the runway garden at GSP Airport, which was designed by the renowned landscape architecture firm of Innocenti & Webel (I&W), based in Long Island, N.Y. Byington also worked with Rick Webel on several design projects in Spartanburg, such as Augusta National, Barnet Park and the Spartanburg Regional Health Center. Those projects afforded Byington the opportunity to work directly for the late Roger Milliken.
“Milliken’s drive for excellence and passion for the built environment influenced many projects I have had the privilege to work on, such as Wofford College, the GSP Airport and Spartanburg Day School,” says Byington.
By 2001, Byington was working solely on I &W projects in the Upstate, and he became the director of the Carolinas office of I &W. Since that time the Carolinas office has focused on institutional, public and corporate projects, including many projects at Furman University and Wofford College, continued work at GSP Airport, RiverPlace in Greenville and the Roger Milliken Center campus in Spartanburg.
Although all of his projects require problem-solving skills for challenges not only in design, but in collaboration and management, Byington says the renovation of the Asian Gardens and the site design of a relocated Japanese temple structure at the Place of Peace on the Furman University campus was one of his more challenging and rewarding efforts. The combined project received a design award from a three-state collaboration of American Society of Landscape Architecture chapters in 2011.
More recently,  Byington completed a two-year study assessing the grounds management of the Roger Milliken Center campus and arboretum in Spartanburg with regard to sustainable practices, and he is currently directing the implementation strategies outlined in that study. He is currently engaged in work at Clemson University, the new terminal expansion at GSP and a special needs playground at the McCarthy Teszler School in Spartanburg. He has also completed a master plan for the Tryon Fine Arts Center.
“The ability to continue working on significant projects in the Upstate, while being based in the pristine beauty and charm of the Tryon area is very special,” Byington said.