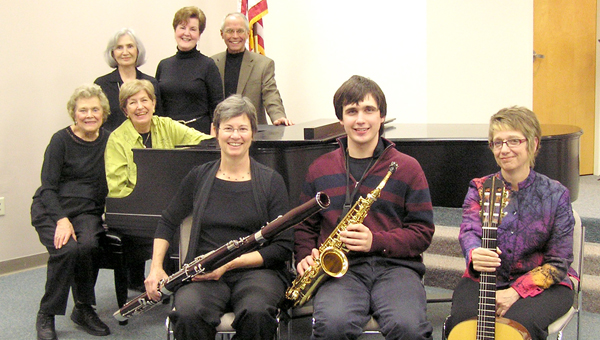 A full house in the recital hall at ICC enjoyed a varied public concert presented by the Foothills Music Club (FMC) on Thursday, Jan. 12 at ICC Polk Campus.
The audience first heard Mark Schweizer’s arrangement of “Simple Gifts,” sung by a women’s chorus organized and directed by Rita Stobbe. The group was accompanied on the piano by Ellie Roemer. Members of the chorus were sopranos Jeri Board, Elaine Jenkins, Mary Meyers and Rita Stobbe; second sopranos Carole Bartol and Jeanette Shackelford and altos Karen Molnar, Nancy Walburn and Ellen Harvey Zipf.
Next, Carole Bartol and Ann Morgan played Faure’s “Berceuse” from Dolly Suite, piano four hands.
Troy Brooks, FMC’s recent scholarship winner and now a college student majoring in music, entertained on his alto saxophone with Eugene Bozza’s “Improvisation et Caprice.”
Jeri Board spoke on the history of Cole Porter’s life before she sang two of the composer’s greatest numbers, “What Is This Thing Called Love?” and, later in the program, “In the Still of the Night.” She was accompanied by Warren Board on the piano and Carole Bartol and Pam McNeil on percussion.
Next, Pam McNeil, Karen Molnar, Carole Bartol and Jeanette Shackelford counted with their entire bodies as they performed “Geographical Fugue” by Ernst Toch.
Amy Brucksch and her classical guitar followed with the three movements of Marc Belanger’s “Jardin Secret.” Brucksch then joined with Kathleen Foster on the cello for Raffaele Bellafronte’s “Suite No. 1,” the third (“Romantico”) and fourth (“Tango”) movements.
Variety? Here’s more. Karen Molnar on bassoon and Carole Bartol on piano played Leonard Bernstein’s “Cool” from “West Side Story,” “Four Sketches” by Gordon Jacobs, which included “A Peaceful Piece,” “A Little Waltz,” “L’Apres-Midi D’Un Dinosaur” and “Polka.”
Finally, cellist Kathleen Foster and pianist Mimi Child Traxler played “The Swan,” from “Carnival of the Animals” by Camille Saint-Saens, and “Bourree, Op. 24” by W.H. Squire. Some of the audience learned for the first time of the term “pontecello,” which is placing the bow close to the bridge of the cello, producing a somewhat eerie sound.
There was a standing ovation for all performers after the almost 90-minute program.
FMC’s second public recital of the year will be presented at the Tryon Congregational Church on Melrose Avenue Thursday, March 8 at 3 p.m. Organists and other musicians will be featured. Again, there will be no admission fee but donations to FMC’s scholarship fund for young musicians will be welcomed.
– article submitted
by Ellen Harvey Zipf