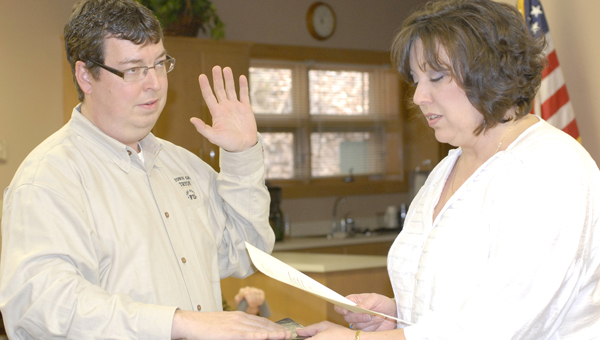 Joey Davis appointed as interim manager
Tryon Town Council members admitted in front of a small crowd Thursday, Jan. 12 that they made a procedural mistake on Jan. 3 by not taking a vote in open session to fire town manager Justin Hembree.
On Thursday, council listened to a number of public comments and then entered closed session to discuss a personnel issue.
When council members returned to open session, they voted to terminate Hembree’s employment. They then appointed fire chief and planning and zoning administrator Joey Davis to serve as interim manager and interim finance officer.
The vote to fire Hembree was unanimous, with yes votes from councilmen Doug Arbogast, George Baker and Roy Miller. Councilman Wim Woody did not attend as he is out of town.
Baker said there was no malice in Hembree’s firing, with Mayor Alan Peoples adding if a vote had been originally taken the result would be the same. Peoples said the town made a procedural mistake and he accepts that. Peoples explained that during the emergency meeting on Jan. 3 he asked if a vote was needed and the consensus was “no.”
“Not taking a vote in open session – that is the only reason we’re here,” Baker said. “There was no malice.”
Citizens at the meeting Thursday asked council members several questions, but council was unable to answer most of them because the termination was a personnel issue.
“I know nothing of what the facts are as to why you want to fire Justin,” said Katharine Smith, “however, I have great concerns about the process.”
Mary Prioleau said it is her understanding that Hembree’s contract reads that if six months’ notice was given by either Hembree or the town to not extend the contract, he could leave and the town would owe him nothing. The town paid Hembree five months’ severance and four weeks’ vacation pay per his contract. When Hembree was hired in 2009, he was given a $75,000 annual salary, according to his contract.
Town attorney Bailey Nager said on Thursday that he could not say until he thoroughly reviewed the contract whether giving six months’ notice would have meant the town would not have owed severance.
“Why was it an emergency?” asked Linda Byington.
“If I answer that we get into personnel,” answered Peoples.
“Did Justin do anything illegal?” Byington asked.
“We can’t answer that. You cannot discuss personnel,” Peoples responded.
Smith then asked what is the town’s definition of an emergency.
“Again, you’ve asked a question that deals with personnel,” Peoples said. “That’s all we can tell you.”
Former Tryon councilman Austin Chapman said it was stated in the Bulletin that the town wants to go in a new direction. He said a new direction is not personnel.
“I’d like to know what the new direction is,” Chapman said.
Emily Clark also asked about the town’s new direction.
“I’m going to be impacted by that new direction,” Clark said.
Council members said the statement about going in a new direction was stated to a reporter by one councilman, not the majority of the board. Miller said saying the town wanted to go in a new direction was a portion of what he said to the reporter.
“There’s new things that come on our desk every day,” said Miller. “There are new things that this board wants to do and basically that’s it. “
Happy McLeod said it is her job to sell the community and she feels like there is a stonewall between the town and its residents.
“You can call it a procedural error, but it’s a black eye,” said McLeod.
Baker said people can keep fishing for answers but there’s no fish in the water.
“You can keep throwing bait in the water all you want, but there’s no fish in it,” Baker said. “We’re here as volunteers. None of us wanted this job when we graduated from high school…. Now, thank you for electing us, I think.”
Baker also said that’s why he had a problem with the Bulletin’s initial article regarding Hembree’s termination, which he said included the phrase “possible illegal meeting.”
The Bulletin’s initial article on the issue said, “The legality of the emergency meeting was questioned by the Bulletin, because no notice was given. According to town attorney Bailey Nager, the town can hold an emergency meeting as long as everyone on council is aware of the meeting.”
The town’s closed session emergency meeting was legal, but the action taken was not valid, because a vote was not taken in open session. State statutes require that terminations of managers be done by an open session vote.
Comments ended Thursday with Smith telling council, “You all work for us; we don’t work for you.”
Davis was sworn into office as the town’s interim manager and finance officer. Council members said they would discuss issues such as handling of duties and salary arrangements at council’s Tuesday, Jan. 17 meeting.
Davis has been Tryon’s fire chief since April 2007. A native of Shelby, Davis graduated in 1997 from the University of North Carolina at Chapel Hill with a B.A. in geography. He holds a master’s degree in public administration from Columbia Southern University, where he is also seeking a doctorate in business administration.
Davis was given the title of planning and zoning administrator in September 2010.
“I’m appreciative of the vote of confidence from the town council during this interim period,” Davis said. “I have always said that Tryon is fortunate to have a great staff and council to work with. We have several issues that we have been working on that we will continue to move forward with. While this is obviously a time of transition, I intend for it to go as smoothly as possible. I appreciate all the kind words of support I’ve received so far.”
Davis said he will continue to handle his duties as the town’s full-time fire chief and planning and zoning administrator while he serves as the interim manager.