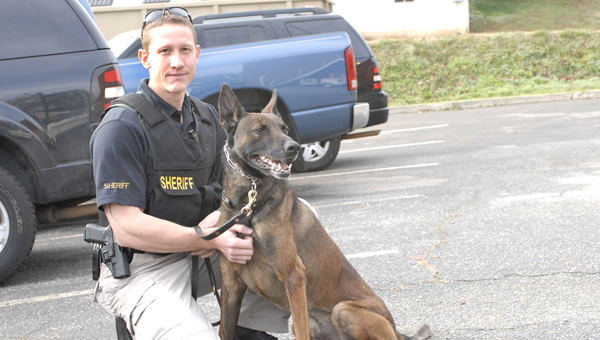 The Polk County Sheriff’s Office has a new officer of the K-9 species.

Kimbo, a 4-year-old male Belgian Malinois, was recently purchased for $11,500 of drug seizure money. His handler and caregiver is sheriff’s officer Jared McFalls, who is training him to assist in narcotics operations, handler protection and tracking. The dog is expected to be certified in narcotics next week.

Kimbo came from the Shallow Creek Kennel in Pennsylvania and was recommended because of his highly trainable nature.  The sheriff’s office has had him for a little more than a month.

McFalls is the sheriff’s office’s N.C. Highway Safety Grant recipient, who is paid mainly by state grant funding to be the county’s traffic enforcer. McFalls said as part of the requirements of the N.C. Governor’s Highway Safety grant, he conducts programs in the school system regarding safety issues such as drinking and driving. He said he plans to implement Kimbo into those programs.