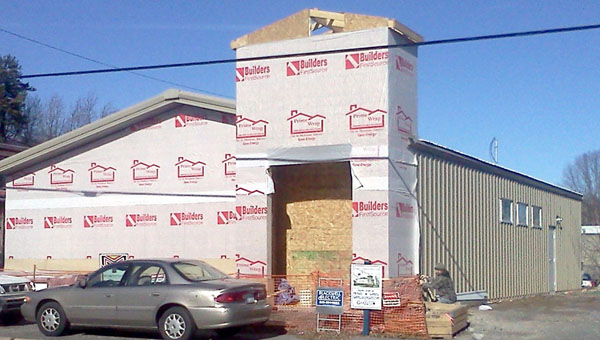 The front of the new Polk County Republican headquarters being constructed in Columbus. Brick work on the front began this week. (photo by Leah Justice)

Building should be complete by Feb. 1

Construction of the new Polk County Republican headquarters building, located on Peak Street in Columbus, is moving along, with Republican officials saying it should be complete by Feb. 1.

Polk Republican officials broke ground on the property on Sept. 27, 2011, and construction of the steel framework of the building began in October 2011.

Original estimates were that the building would be complete by the end of the year, but construction was delayed several times by weather, mainly heavy rains.

The building is 2,400 square feet and is made of steel, but the exterior is being made to look like other buildings in Columbus. Brickwork on the building began this week.

Parking for the Republican Headquarters will now be in the rear of the building.

The former building was torn down last year after the roof collapsed from a snowstorm in December 2009. The original building was initially built to house the Columbus Post Office in the 1950s or 1960s.