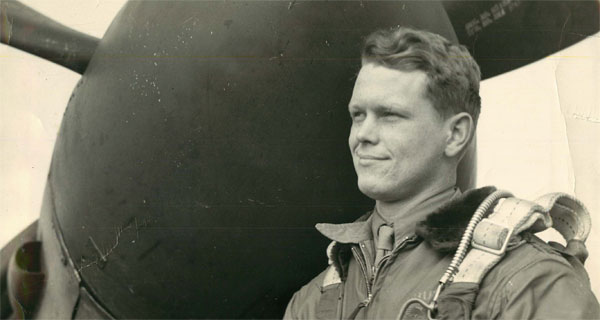 Bushner in his military days.

Many knew this slight, cheerful, unassuming man, but few knew about his remarkable life — a life that took him across the globe to serve his country in war and peace.

Bush was born on Dec.13, 1920 in Joplin, Mo. His mother was Grace Hawbaker Haggart and his father was Harold Park Haggart. Later, following his mother’s second marriage, to Richard H. Bushner, Bush adopted his stepfather’s name. He attended Joplin Junior College from 1938-40 and obtained a bachelor of music degree in piano from Kansas State Teachers College in Pittsburg in 1942. 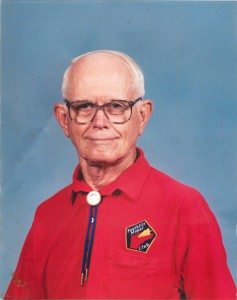 Following the Japanese attack on Pearl Harbor, Bush learned to fly in a civilian pilot training program and subsequently volunteered for the U.S. Army Air Force, where he served in the 2nd Division’s 466 Bomb Group. With his crew of nine men, Lt. Bushner piloted B-24 Liberator bombers on 35 missions over Germany and occupied France during 1944-45. Only one in four B-24 crewmen survived a full 35-mission tour.  But rather than punching a ticket home, Bush volunteered to fly weather reconnaissance missions over Germany in an unarmed British-made de Havilland DH98 Mosquito. Made mostly of wood, with massive Rolls-Royce engines, the two-seat Mosquito was perhaps the fastest piston-driven aircraft of the war. Bush flew the equivalent of a half-tour in the Mosquito before the war came to an end.

One can hardly imagine making the transition from wartime pilot to classical pianist, but Bush did it. Returning to the states in 1945, he attended New York’s prestigious Julliard School of Music. But service to country once again beckoned, and after a single term at Julliard, he joined the U.S. Foreign Service. Thus began a long and distinguished career as a diplomat.

During the 18-year period immediately following the war, Bush served in a variety of settings and capacities. In Tokyo, he was assigned to the Supreme Commander for the Allied Powers (SCAP) U.S. Political Advisor’s office, 1946-48. There followed a series of assignments where he served as political reporting officer at U.S. embassies in Bangkok, Thailand (1948-52); Pusan, Korea (1952-53); Tehran, Iran (1953-55); and the American Consulate in Khorramshahr, Iran (1955-56), where he opened the new U.S. Consulate. Returning stateside, he spent three years at the State Department as Thailand Desk Officer and one year at the U.S. Air Force War College in Montgomery, Ala. His final assignment for the Department of State was as Counselor for Political Affairs at the American Embassy in Jakarta, Indonesia from 1960 to 1963.

In 1963, Bush left the State Department to accept a position with the nonprofit, nonpartisan Council on Foreign Relations (CFR), considered to be the nation’s most influential foreign policy think-tank, headquartered in New York City. As director of committees on foreign relations from 1963 to 1987, his job was to arrange for statesmen and foreign affairs experts to address some 36 CFR affiliated committees scattered across the nation. During this period, he earned a master’s degree in Government from New York University in 1976.

During his CFR years, while living in an 1883-vintage home in New Jersey, Bush developed an interest in antique automobiles, and in 1972 he bought a 1926 Packard 8 Touring car, Series 236. This was followed in 1974 by the purchase of a 1933 Packard club sedan, which had been sitting in an icehouse for 17 years. He spent much of the next 20 years lovingly restoring the grand vehicle.

Over the years, his classic car collection would grow to include a ’54 Packard, ’57 Chrysler Imperial, ‘60s era MG, ’66 Lincoln Continental convertible, and ’69 Buick Riviera.

For Tryon locals, however, perhaps Bush’s most recognizable vehicle was an old multicolored Volkswagen Beetle that he drove around town for a number of years.

In 1987, Bush came across an article in a retirement newsletter that touted Tryon, NC as a good place to spend retirement. He bought a home here and lived out a happy retirement. Bush’s Tryon home reflected his unique experiences. The baby grand piano, photos and awards from World War II, unique furnishings and eclectic artwork from across the globe, letters from dignitaries and heads of state, and his stunning collection of antique automobiles all stood as a testament to a long journey on a road less traveled.

He was active even in his final months. In August, the Smoky Mountain AACA sponsored him on an Honor Air flight to visit the World War II Memorial in Washington, DC. As a measure of their esteem, 60 club members greeted him upon his return flight to Asheville. The following month, the club honored him as Outstanding Member of the Year.

Rolland Bushner was active in three regions of the Antique Automobile Club of America (AACA): New Jersey, Sparkle City and Great Smoky Mountain. He also belonged to the Blue Ridge Packard Club, Foothills MOPAR Club, the Riviera Owners Association, the Southeast British Motor Car Owners Club and the Southern Region Lincoln and Continental Car Club. He was a member of the Unitarian Universalist Fellowship and a friend of the Congregational Church of Tryon.

At Bush’s request, there will be no service. A drop-in in his honor will be held at the Tryon Depot in downtown Tryon at 3 p.m. on Saturday, Dec. 31.

Memorials may be made to Hospice of the Carolina Foothills. Inquiries or condolences may be addressed to Sara Stevens, c/o 236 Erskine Rd., Tryon, NC 28782; email ssara7789@gmail.com. Phone inquiries may be directed to 828-859-3141.