A fascination with French horn 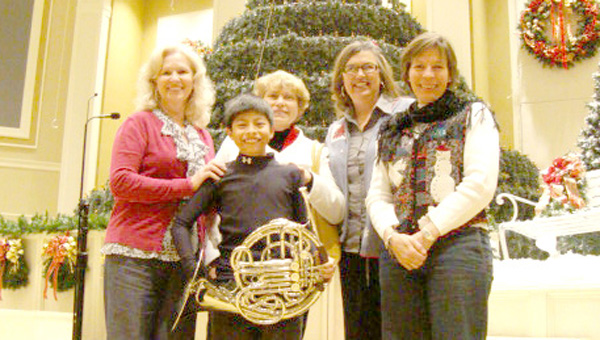 O.P. Earle student plays for Living Christmas Tree
It all began in 2009 when a nine-year-old boy didn’t want to go to his brother’s baseball practice. The alternative was to go with his mom, who was playing in the orchestra of the Living Christmas Tree at Berea First Baptist Church in Greenville, S.C. The only place he could sit was in the orchestra pit on the step next to the French hornist, Paula Riddle, professor of French horn at Furman University.
Isaiah Adderholdt, a student at O.P. Earle Elementary in Landrum, said he fell in love with the French horn at that moment and began asking for a French horn. In 2010, he again sat on the step next to Riddle for every performance of the Living Tree and continued asking for a French horn.
His parents secretly bought him a used beginner’s model (single horn) and sent him on a treasure hunt all over the house until he found the horn in the storage room next to the hot water heater. The first words out of his mouth were, “Wow!  Now I can play the Tree next year with Ms. Paula!”
Adderholdt had his first French horn lesson on Jan. 3, 2011. In mid-February, Dr. Barry Bridwell, director of bands for Landrum High School, agreed to allow Isaiah, a fourth grader, to join the sixth-grade band, and the cooperation of many faculty and staff at
O. P. Earle Elementary, Landrum Middle School, and Landrum High School made it possible. 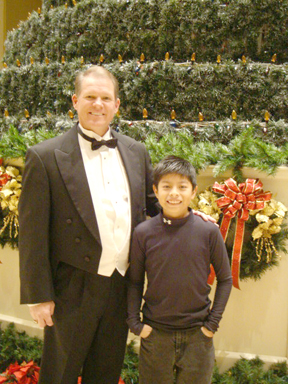 On March 22, Isaiah played his first band concert. It was at this time, his French horn teacher, Selena Adams, now at the University of Colorado, said he should begin playing an advanced model (double horn).
On April 28, he competed at the S.C. Solo and Ensemble Festival, earning a superior rating. Now a fifth grader, Adderholdt is playing with the Landrum Middle School eighth-grade band.
Adderholdt’s initial dream came true this year when Chris Murrell, minister of music at Berea First Baptist, granted his wish. He played second French horn in Berea’s Living Christmas Tree orchestra, sitting next to Anneka Zuehlke, principal French horn with the Greenville Symphony Orchestra.
– article submitted
by Dawn Lynch