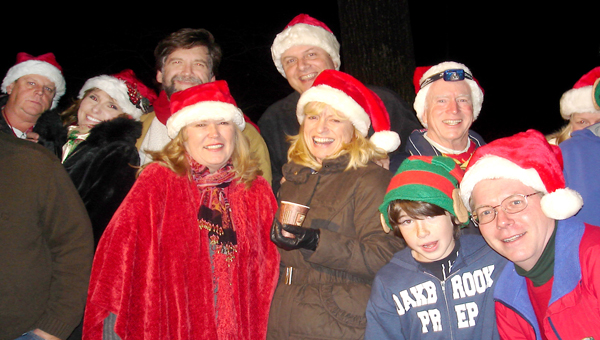 There’s no denying that Tryon is an artsy kind of town and its citizens can sometimes go outside of the nine dots when it comes to having fun (consider the April Fool’s Day Outhouse race for instance). Well, if you think that annual race takes the cake, perhaps you’ve never heard the Dump Truck Caroling group that’s been around since 1998. Here’s how it all began.
Rumor has it that some of the locals got to talking and one of the more creative citizens among the group (all fingers point to Bill Crowell) came up with the idea of having a caroling party on the Saturday before Christmas Eve. He and Kathleen Carson offered to provide chili and spiked hot cider and about a dozen friends agreed to bring side dishes along with their good cheer.
One thing led to another and Santa hats were added to the mix. John Matthew offered to cart everyone around in the big old dump truck he used for delivering mulch for his landscaping business. It was quite a sight, filled with hay and people as they caroled and careened through the town.
“There was never a regular route and most of the carolers had someone in their neighborhood they wanted to sing to and the truck could go anywhere,” said Carson, adding, “It was always bitter cold on the truck and folks would arrive with extra coats and hats, scarves and mittens and even blankets.”
The group appointed a musical director to lead the group in song each year. One year, when the designated leader was very late, all the group could muster was a resounding and repetitive rendition of “Joy to the World.” Another year, it rained and rained, so the group simply stayed inside to sing.
“By this time, some experienced singers were among the guests and, as we gathered in our living room, we all sang so beautifully, it brought tears to our eyes,” said Carson.
As word about Dump Truck Caroling (and the chili and spiked cider) spread, so did the size of the group. One year, there were too many to fit everyone in the truck, so the “overflow” walked alongside.
“That was when we realized that no one could ever hear the singing over the truck’s rumbling,” recalled Crowell. “We went to one house and only the family dog came to the window. He watched the whole performance and did not even woof!”
After that, the group, which has now grown to as many as 35 members, decided to leave the dump truck behind. The musical Tryon tradition retained its name (and the Santa hats) and the group still gathers together every year to spread their Christmas cheer.
“Dump Truck Caroling has changed somewhat over the years,” said Jeff Byrd, “but it is for the better, because now we actually have people who know all of the lyrics and can sing!”