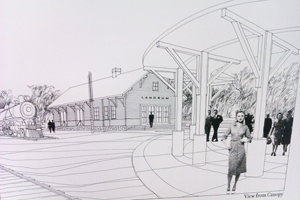 Landrum City Council unanimously approved moving forward with John Walters Architects of Tryon for the redesign of the town depot after a question-and-answer session Tuesday, Oct. 11.
John Walters said he appreciated the vote of confidence from the city and the opportunity to improve such a historic landmark.
“It’s very visible in Landrum – it’s right on 176, so it will be a lot of good exposure for the town and will clean up that entry area,” Walters said. “We’re very excited.”
Walters said the intent is to get the depot as close to its original look as possible while updating electrical and mechanical systems. Renovations will also update the look and feel of the meeting space, while adding new handicapped-accessible restrooms and a kitchen area. There will also be additional exhibit space.
Walters is currently updating plans based on comments from city council members.
Landrum City Administrator Steve Wolochowicz said one of the changes involved moving the proposed stage from under a curved pergola to be connected instead with the stoop at the end of the depot. Wolochowicz said they believe that would leave the area in front of the stoop to set up chairs and listen to music during events.
“I think that was a real good idea. We’d still leave the curved pergola in there because it’s a nice architectural feature and provides shade,” Wolochowicz said. “The council has really put some time into thinking about what would be best for the redesign.”
Walters said he anticipates beginning work on the 2,300-square-foot building in the spring, with bids going out for construction in early 2012.
Engineers will go through the building with architects next week. Then Walters said final drawings could be drafted.
“Looking at train depots from the past – old photos and such – we were trying to pick up that same feel,” Walters said. “Trying to take a traditional form and make it a real entryway.”