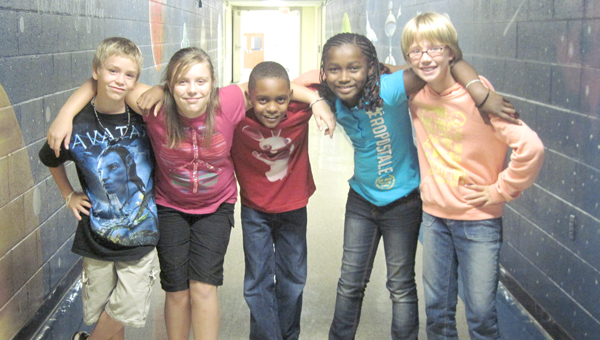 Several of the students at O.P. Earle Elementary who helped write, shoot, act out and edit the video that won $10,000 for the Boys and Girls Club’s art program. Pictured left to right are fifth-graders Hunter Brant, Kaitlyn Painter, Miccoa Price, Shionna Miller and Sophie Sandahl. (photo by Samantha Hurst)

Nightmarish clowns and acrobatic ninjas, plus a few film takes, were all that stood between O.P. Earle Elementary student Miccoa Rice and “The Holy Cupcake” this summer.
Student producers in O.P. Earle’s Boys and Girls Club called cut on the final scene of their production two days after beginning to roll film. Cast and crew knew they had something special, but they didn’t know it was $10,000 special until last week when the Boys and Girls Club of the Upstate received notification that the movie was one of 10 national winners in the Disney/Pirates of the Caribbean film competition.
“They came up with such a great idea and they executed it so well,” said Heidi Fortune, who runs the theater and filmmaking program for the organization. “I certainly could never come up with such a creative concept.”
Fortune mentored fifth graders in O.P. Earle’s Boys and Girls Club theater group throughout the making of the video. She taught them about shot lists, lighting, camera angles, directing and editing, among other elements of the process.
“I learned a lot,” said student Kaitlyn Painter. “I thought making a movie like this would be something little – that it wouldn’t take a lot of work, but there was so much to do.”
To come up with the story line for the live-action movie, students each created story plots. Concepts from students Sophie Sandahl and Shionna Miller ended up leading the way with tales of a clumsy spy and a kid on a journey to find the “Holy Cupcake.”
“We’re really excited because it turned out really funny,” Sandahl said.
Both girls worked behind the scenes and said they enjoyed learning about making a movie.
“I got to help them with what they had to say. I got to help them with their clothes and makeup and Miccoa with shooting the clowns with the silly string,” Miller said.
The girls and their peers directed Miccoa Rice, the main character, as he weaved a path through the school past evil clowns at the front door, mean girls in the hallways and tumbling ninjas in the cafeteria to finally reach “The Holy Cupcake.”
“Covering the clowns with silly string to stop them and playing the iPod to stop the mean girls were probably my favorite parts,” Rice said.
This creative play on an Indiana Jones type film helped the kids grab $10,000 for their Boys and Girls Club art programs.
What does $10,000 mean to an art program?
Because so many grant programs have been cut, Fortune said the money will help keep the visual arts instructor position traveling to each club and provide materials for the arts program projects in the spring.
Sixty-three organizations from around the country signed up for the contest, and more than 40 actually submitted entries.
“I thought this is something that we do – we do a filmmaking program – and I thought the Landrum kids did such a great job on an earlier silent film they had made last year that they could definitely do this,” Fortune said.
Landrum was one of two live-action films to win out of the 10 national winners.
“Making the film let them explore and that’s what making art when you are a kid is all about,” Fortune said.