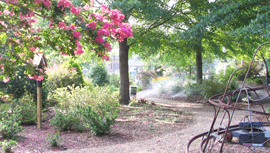 The Polk County Community Foundation recently awarded two Kirby grants to the Tryon Garden Club for civic beautification and Pearson’s Falls erosion control.
In keeping with the mission of the Tryon Garden Club to contribute to the beautification of Tryon, the organization has maintained the Tryon depot garden since 1948. Garden club officials requested funds from the Kirby Tryon Garden Club special projects fund to enhance the garden after the depot’s recent renovations. Included improvements were pruning of trees, cleanup, mulch and planting of new bushes at the garden.
The Tryon Garden Club has owned and maintained Pearson’s Falls and the surrounding glen since 1931.
Pearson’s Falls has received state and national recognition for its preservation of more than 200 species of native trees, as well as a number of rare flowering plants and ferns. In 2010, more than 20,000 visitors enjoyed the glen as they walked the trail to the 90-foot waterfall.
An unrestricted grant from The Polk County Community Foundation for erosion control was awarded to the Tryon Garden Club in October 2010 to assist in the abatement of the significant wash and damage to the drive to the glen.
An additional grant from the Kirby Tryon Garden Club Pearson’s Falls trail maintenance fund was awarded in June 2011 that allowed the club to plant ferns at Pearson’s Falls for continued erosion control and tree removal on the trail north of the picnic area to maintain access to the falls.
For details, contact Delia Tittle at 828-859-8372.
– article submitted
by Jane Templeton