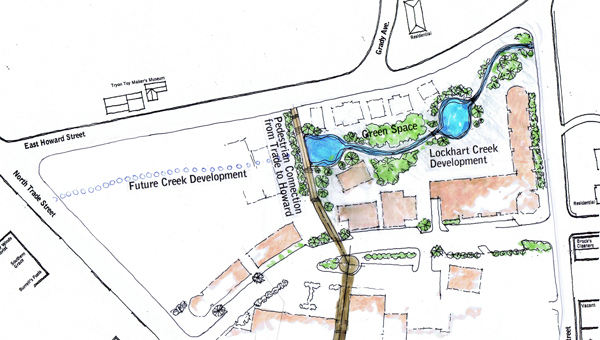 One of the sketches of possible development of the Palmer Street area in downtown Tryon. This sketch proposes a park near Palmer Street, at the intersection of E. Howard Street and Maple Street. The proposal includes water features created from Lockhart Creek, which could run through the area.

Ideas include green space, parking area, mixed housing/retail
The Tryon Downtown Development Association (TDDA) recently held a charrette during which interested residents brainstormed possibilities for future development of the Palmer Street area in downtown Tryon.
Architect John Walters said the TDDA has for a long time thought about doing a study on the Palmer Street area, which includes East Howard, Maple, Palmer and N. Trade streets.
Walters said it was surprising how many of the same ideas came from different people during the two-day session.
Some of the ideas that resulted from the charrette were turned into archictectural sketches, which Tryon council members reviewed on June 21.
Development ideas from the public and the TDDA included:
• Extending housing units on Howard Street
• Addressing public and employee parking needs
• Looking at improvements to the rear of buildings for loading areas
• Developing the lower levels of existing buildings
• Burying electrical lines and adding lighting
• Adding green space
• Exposing Lockhart Creek to create a future pedestrian amenity
The downtown parking issue was addressed by several proposals. One was to develop parking facilities at the corner of N.Trade and Palmer Street, if one day the Stott’s Ford property were to become available. Other structured parking lots for both the public and business employees downtown were part of many of the proposals.
The ideas also kept pedestrians in mind, with linkage points for walkability in the area.
Walters said the drawings included ideas from some area business owners.
One sketch (see above) shows the town’s street department area, at the corner of Maple and Howard streets, which could one day include other businesses and/or low grade parking for residents and downtown employees, as well as greenspace and a stream.
Councilman Wim Woody said this idea would require the removal of the town’s maintenance facility as the first step. Mayor Alan Peoples said relocating the town’s facility is currently in the town’s plans.
Council members asked if the park-like area along the stream is being viewed as public or private. Walters said he sees opening up the stream and a park for the public.
“Again, this is market- and economy-driven,” Walters said of the ideas shown in the drawings.