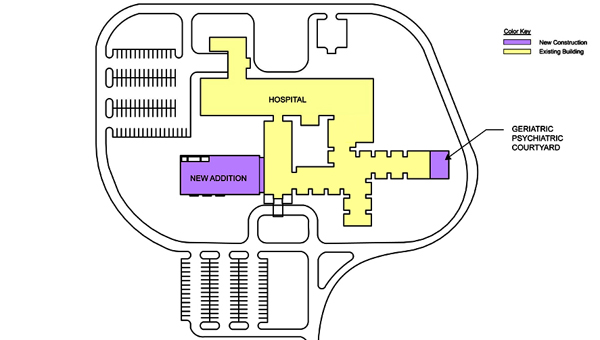 Architect’s drawing of the proposed addition at St. Luke’s Hospital, phase one. The addition is shown to the left of the main entrance, and a planned geriatric courtyard is shown on the right. In order to obtain financing for the addition, St. Luke’s has asked Polk County, which owns the hospital property, to deed the property to the St. Luke’s Hospital Foundation.

RESOLUTION APPROVING CERTIFICATION ATTACHED TO CERTIFICATE OF NEED APPLICATION TO BE FILED BY ST. LUKES HOSPITAL, INCORPORATED WITH THE CERTIFICATE OF NEED SECTION OF THE DIVISION OF HEALTH SERVICES REGULATION, NORTH CAROLINA DEPARTMENT OF HEALTH AND HUMAN SERVICES.
WHEREAS, Polk County, North Carolina (the “County”) is the owner of certain real estate and improvements (the “Real Estate”) located at 101 Hospital Drive, Columbus, Polk County, North Carolina; and
WHEREAS, the Real Estate is leased to St. Luke’s Hospital, Incorporated (“St. Luke’s), a North Carolina nonprofit corporation, pursuant to a lease (the “Lease”) dated February 21, 2000 between Polk County, as lessor, and St. Luke’s, as lessee; and
WHEREAS, pursuant to the Lease, St. Luke’s occupies and uses the Real Estate in connection with the operation of a licensed, acute care hospital (the “Hospital”) which operates under the name “St. Luke’s Hospital”; and
WHEREAS, St. Luke’s is authorized, pursuant to the terms of the Lease, to make capital improvements and additions to the improvements located on the Real Estate and to finance the construction of such capital improvements and additions, and the Lease further provides that the County shall not be responsible for the payment of any such financing or for deficits in the operation of the Hospital; and
WHEREAS, St. Luke’s intends to apply to the Certificate of Need Section of the Division of Health Services Regulation for a certificate of need for a project (the “Project”) which includes the relocation and/or replacement of six medical/surgical acute care beds along with therapy services (physician, occupational and speech) to a new one-story building located adjacent to and connected to the existing Hospital building, and the project also includes the construction of a courtyard for use by the existing geriatric psychiatric unit; and
WHEREAS, there has been presented to the Board of Commissioners at this meeting a proposed Certification (the “Certification”) which describes the Project and which indicates that the Project is consistent with the duties and powers of St. Luke’s and that the Board of Commissioners supports the Project.
NOW THEREFORE BE IT RESOLVED BY THE BOARD OF COMMISSIONERS OF POLK COUNTY, AS FOLLOWS:
Section 1.That the Board of Commissioners of the County (the “Board”) hereby finds and determines that the Project is consistent with the duties and powers of St. Luke’s under the terms of the Lease and the Board hereby indicates its support of the Project.
Section 2.That the form and content of the Certification presented to the Board at this meeting is hereby approved and the County Manager is hereby authorized and directed to execute the Certification on behalf of the County, and to deliver the Certification to St. Luke’s to be included in the Certificate of Need Application.
Section 3.That this Resolution has been adopted upon the understanding and condition that the County is not and will not be responsible for any portion of the costs of the Project.
Section 4.That this Resolution shall become effective on the date of its adoption.
ADOPTED this 10th day of May, 2011.

McDermott’s statement on St. Luke’s Hospital request
Editor’s note: Following is a statement read by Polk County Commissioner Renée McDermott regarding a request by St. Luke’s Hospital for the county to deed the hospital property to the hospital in order to obtain financing for a $6.5 million expansion.
At some point the board of commissioners will need to address St. Luke’s Hospital’s request that the hospital building and the land on which it sits be donated to the hospital.
That decision has not been made yet, either by the board of commissioners as a whole or by me. That decision must await thorough research of the facts and the law.
Nevertheless, I have heard from a number of people that they have been told that I have already made such a decision and that I am in favor of donating the building and grounds to the hospital. I have not made any such decision.
If you have been told that I have already made such a decision, your source is either badly misinformed, or he or she is intentionally telling you something that is untrue.
-Polk County Commissioner Renée McDermott

The fox that bit two Green Creek residents on Sunday, May 8 tested positive for rabies, according to the Polk... read more