PCHS students reap what they sow 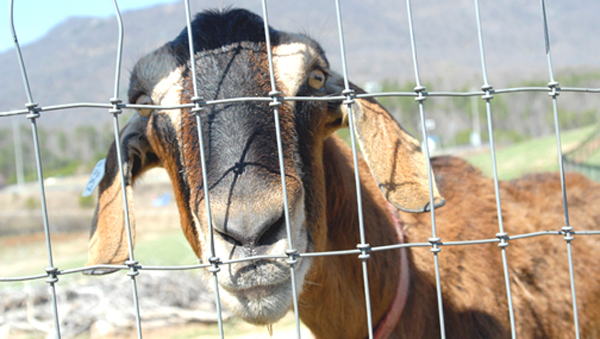 A goat on the Polk County High School Farm. (photo by Leah Justice)

Polk County High School farm celebrates five years
Polk County High School students experience agricultural classes on a whole different level than students in many schools.
They grow their own strawberries, blueberries, pumpkins and grapes, take care of goats and chickens and even have their own calf they raised named “Milkshake.” And it’s all located in the school’s backyard.
Polk High’s farm, located on 7 acres adjacent to the school, was acquired in 2006. The funds to purchase and develop the farm were raised in a short time.
Agriculture teacher Chauncey Barber posed the idea of a school farm to Polk officials in 2004 and the “Polk County School Farm – Help Us Grow” project began.
Barber said in 2003 he and some students were at a competition in Salisbury and a parent of one of the competitors, Margaret Whitten, planted the idea by saying Polk County High School should have its own farm.
“You think something like that is impossible,” Barber said, “but I didn’t realize that other people value it as much as I do.”
A committee consisting of John Vining, Jeff Bradley, Jerry Steadman and Gerald Harbinson was formed to find the most suitable location.
Michael Fulenwider, who was purchasing a couple of acres by the school, put money down to hold the other seven acres for the school to purchase. The price was agreed upon at $170,000 in December 2004 and Fulenwider agreed to hold the property for a year so money could be raised.
Project organizers had until the end of January 2006 to come up with the money. The school board contributed $50,000 and the remaining $120,000 was raised privately and through grants.
Polk County High School Principal Aaron Greene said he’s been to a lot of places throughout the state and doesn’t think there’s anyone else with a farm as unique as Polk County’s. He gives tribute to the community that helped raise the money and continues to contribute to the project. He also said 250 to 300 students experience the farm every year.
“It really is a true real world application,” said Greene. “We can’t imagine where Polk County High School would be without it. It’s a tribute to the community, to teachers and the students who are excited and eager to get out there and work and learn.”
Barber and agriculture teacher Kevin Bailey said they can’t say enough about what the farm has done for high school students and the community. Polk County High School has some of the highest agricultural testing scores in the state.
Barber said it’s much easier for students to learn about agriculture when they have that hands on experience. Students harvest their crops and sell them as well as eggs to make the farm self-sustainable. Barber said a lot of produce and eggs are also given away.
Another experience Polk County High School students receive that is rare for high school students is hands-on learning of veterinary and biotechnology procedures. They do their own animal vaccinations and immunizations, as well as examining fecal samples to make diagnoses.
“I think there’s few kids in the state who get to do that,” said Bailey.
The farm serves as a model for the state, with officials from North Carolina State University often coming to tour the farm.
“Other schools have farms, but don’t offer the diversity we have,” said Barber.
Bailey said other farms also don’t have the community support of Polk County.
“It took the community to make it happen,” said Bailey.
At the farm, located on a hillside directly behind the school, students tend to Boer goats and laying chickens. Depending on the season, they grow strawberries, pumpkins and blueberries, and they maintain a muscadine grape vineyard. The farm has also raised quail in the past and has plans to plant apple trees in the future.
“I think one of the biggest things students get out of the farm is work ethic,” said Bailey. “I think it serves them well in life.”
The farm has been used by many, with children of all ages coming for tours. Local organizations such as garden clubs and the Polk County Cooperative Extension also help at the farm.
The farm includes an outdoor classroom, which is a 30’ x 30’ building with picnic tables available to any class at the high school or for community events.
The Farm Bureau sponsors a program every year in which every fifth grader in the county visits the farm in the spring. Barber said it’s not only good for the young students to spend time at the farm but great for the high school students who put on the programs.
A summer program was also made available beginning a couple of years ago by the Polk County Community Foundation, through which two students are paid salaries to take care of the farm and animals during the summer months.
“We appreciate everything people have done,” Barber said. “Text books wear out. The school farm doesn’t.”