As the sun settled behind Chapman High School on Thursday night, the Landrum and Chapman baseball teams settled into a pitchers’ duel. Chapman’s Benjamin Ziegler and Landrum’s Kaleb Kuykendall traded strong innings all night before Chapman finally closed out a 3-0 win.
“It was a nip and tuck game,” Panther head coach Matt McDaniels said. “It was a good pitchers’ duel. It was fun to watch.” 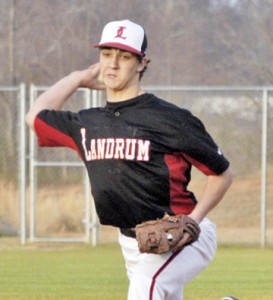 Ziegler, a 6’1” sophomore, allowed just three hits in his complete-game shutout of the Cardinals and won his second game of the season in the Steve Sanders Tournament.
“I just kept at it and had good defense behind me,” Ziegler said.
It was a blue collar effort for the sophomore. He retired the first ten batters he faced with four ground balls, four fly outs and one strikeout.
The Chapman offense got its first run in the third inning off Kuykendall. Designated hitter Ben Settle looped a ball just over Joseph’s Smith glove at second base. Chapman third baseman Austin Brackett followed with a ground ball to third base that caused an error at third and in right field. That allowed the first run to cross the plate for the Panthers.
Chapman (2-1) added two more runs in the fifth inning. Jacob Scruggs and Settle walked. Kuykendall battled back and got Bracket to ground out to second. With two outs and two on, Chapman left fielder Kody Stewart singled to drive in the final two runs. Landrum (1-2) battled back, trying to rally some support for Kuykendall in the seventh. Catcher Thomas Rabatie drew a walk. Jon Humphries and Gus Wofford followed with singles. Ziegler then got Hunter Pruitt to fly out in foul territory at first base and Matt Pruitt grounded out to second base.
Landrum coach Ray McCallister could only shake his head and let his pitcher know what a great job he did.
“He pitched a great game,” McCallister said. “Defensively, we didn’t back him up.”