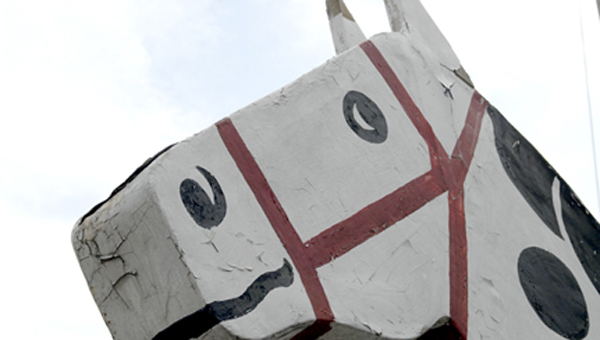 Morris the Horse, the iconic wooden figure at the corner of N. Trade and Pacolet streets in Tryon, is showing his age. Paint is peeling on his ears, head, legs and other areas. Tryon Riding & Hunt Club has offered to donate Morris to the Town of Tryon, whose symbol he has been since 1928. (photo by Leah Justice)

Town looking  into repair, administrative costs
The Town of Tryon could soon own its symbol, the wooden statue of Morris the Horse, which has been located downtown since 1928.
The Tryon Riding & Hunt Club (TR&HC), which owns Morris, has offered to donate the statue to the town.
Tryon Town Council discussed the offer Feb. 15.
“The board of directors of the Tryon Riding & Hunt Club voted at their recent meeting on Jan. 31, 2011 to donate the statue of Morris the Horse to the Town of Tryon,” said TR&HC President Charles Lingerfelt III in a letter to the town. “This fixture has been part of the TR&HC history since it was built for the club in 1928 and has subsequently become a symbol for Tryon.”
The TR&HC has asked that given its history, the club reserve the right to create a replica of Morris at the Green Creek Equestrian Park in the future. The club also requests first rights to Morris’ schedule for advertising TR&HC events on the statue.
Tryon Town Manager Justin Hembree said there will be some costs associated with taking ownership of the statue. He said participants at recent business round table meetings have discussed the statue’s need of a paint job. They have also said the town should take ownership since Morris is a symbol of the town.
Hembree also said there will be ongoing administrative costs for scheduling advertising banners that appear on Morris.
Tryon Mayor Alan Peoples said he would like to know the costs of restoration of the statue and suggested creating a donation fund so the community can contribute to the statue’s restoration.
Hembree said a couple of cost estimates for a brand new Morris have been developed and other people are looking into what it would cost for repairs. Hembree says he plans to present cost estimates to council next month as well as recommendations on how the town would manage the advertising.
The original Morris was designed by Eleanor Vance as a giant version of one of the most popular toys made by the Tryon Toy-Makers and Wood-Carvers, which was owned by Vance and Charlotte Yale. Morris the statue was built for the TR&HC in 1928.
The original Morris was destroyed in a fire and four other statues based on Morris’ original design have been built since. Tryon residents named the statue “Morris.”
“We know that Morris will be in good hands with this donation,” said Lingerfelt’s letter.