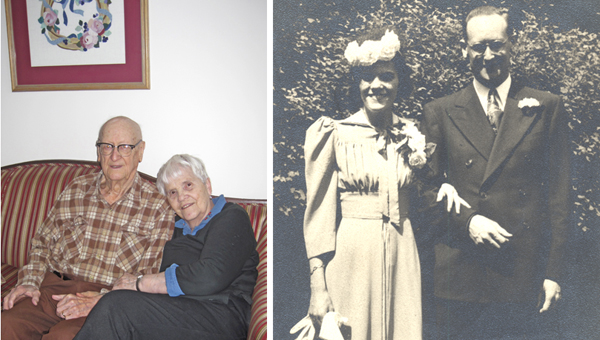 Joe and Susie House, who are celebrating their 70th Valentine’s Day today, are shown on their wedding day, June 10, 1940 (left), and today. (left photo submitted; right photo by Samantha Hurst)

A beautifully crafted quilt hangs from the wall of Joe and Susie House’s room at Tryon Estates. On every other panel, personal notes from their grandchildren congratulate them on 50 years of marriage.
That was 20 years ago and now those grandchildren have children.
“We’ve had a great marriage,” Susie said. “I think we just melded together.”
Joe and Susie married 70 years ago on June 10, 1940.
The two met in New Kensington, Penn., in the late 1930s when Joe’s company, Standard Railway Equipment, moved him there from Pittsburg.
Susie lived just across the street and Joe would drive her and a friend to work each day. The two eventually fell for one another.
Susie was just 20, and Joe 25, when they married. In Pennsylvania you had to be 21 to wed legally, so Susie’s father went with them to get the marriage license.
“We had the same likes and dislikes,” Susie said.
When you ask Joe what he liked about Susie, he said, “Everything.”
The two moved to Chicago soon after they married, after Standard Railway moved its headquarters. In their 70 years, the two were only apart for any real length of time while Joe served in the war. He said he was gone nine months.
Otherwise, the two have been side-by-side, they said.
“We respect each other’s rights,” Susie said. “So mostly it worked because of that and well, of course, love.”
The Houses raised five kids – four boys and a girl – and have seen the births of 14 grandkids and nine great-grandchildren.
Now their family is spread out around the world. One son, who resides in Columbus, is currently working in Afghanistan, while a grandson lives in France, they said.
Joe and Susie have seen their share of the world as well.
They’ve traveled to Europe – visiting Germany, London, Paris and Rome. They even took a cruise around the Greek isles, they said.
Some of their fondest excursions, though, surround family trips.
“When the kids were still young, we took our camper on several western trips to Yellowstone and even up to Canada,” Joe said.
The two moved to Tryon years ago after regularly visiting friends here. They bought their first home on Chocolate Drop Mountain and later moved into a condo to eliminate their housework.
The Houses currently live in Tryon Estates, where Joe said he’s happy not to have to make the bed and Susie appreciates not having to do Joe’s laundry. Now they can simple enjoy time together and hearing from family they love.