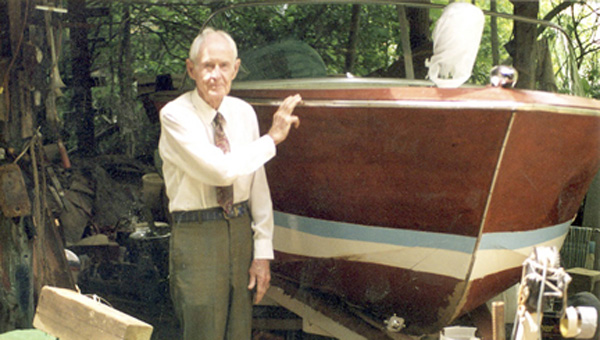 Frank 'Boat' Williams beside one of the many boats he restored in his lifetime. Williams, a long-time Lake Lanier resident, died Saturday, Feb. 5. (photo submitted)

Lake Lanier loses legend: Frank ‘Boat’ Williams dies at 104
by Leah Justice
The words “praise God” and “Amen” may never be the same again.
Frank “Boat” Williams died at the age of 104 on Saturday.
At Sunday’s church service at Williams’ church, Tryon First Baptist, John and Laura Spinks played guitar and sang the old gospel song “Never Grow Old” in Williams’ memory. At the end of the song, John Spinks said, “Praise God,” and Laura Spinks ended with “Amen,” which is exactly what Williams would have said if he’d been there.
Many people will remember Williams went nowhere without wearing a suit with a flower in his lapel, he kissed ladies’ hands and he sat in the front pew singing praises at Tryon First Baptist Church. He’d been a member of the church since 1933.
Williams was well-known for his stories about restoring boats and building a plane.
There aren’t many people in the area who haven’t heard Williams tell his life story. And nobody tells it quite like he did.
When Williams was 100 years old in 2007, he told his story to the Polk County Historical Association. At that time, he was still driving his car and restoring Chris Craft boats. He told the historical association audience he always held down three jobs and still had three jobs then.
Williams was born on Nov. 24, 1906. Born in Waco, N.C., between Shelby and Lincolnton, and spending his youth in Cherryville, Williams talked about growing up on a farm, with memories of helping his father hitch the wagon so the family could go to church.
Williams told PCHA about his family’s first car, which had to be cranked.
“Now everything’s automatic and it takes the fun out of it,” Williams said.
He said his first job was going door–to-door washing cars for 25 cents. He later sold parts, such as fan belts and motor oil, once Model T Fords came out.
Most of Williams’ life was spent working on Chris Craft boats and on the water at Lake Lanier. Williams could still be seen in the past ten years zooming up the lake, driving an old wooden boat. He didn’t much care that some sections have “no wake zones.”
One of Williams’ most famous stories dates back to the Depression when there were no jobs. He said his family heard there were jobs in Spartanburg, S.C., and having no car then, he walked the 69 miles to Spartanburg.
“There were no jobs in Cherryville, so I got up one morning and was determined to find a job,” he said. “I went with a baked potato in one pocket and a ham biscuit in another pocket.”
In Spartanburg, Williams got a job at the Ford place. He and his wife, Virginia (“Ginger”), later started Williams Motor Company.
Another well-known story of Williams’ is how he and a friend built their own airplane in the 1920s.
Williams said he remembered one day around 1923, he and his friend Lewis saw a plane fly over them. He and his friend got parts and used a car engine for the plane and taught themselves how to fly. They later traded their homemade plane for a real plane.
Williams also often recalled flying over Lyman, S.C., one day when the plane ran out of gas, forcing him to land the plane in a fence full of chickens.
“I can close my eyes today and see the feathers flying,” Williams told the historical association in 2007. “I don’t have a plane right now, but I can fly one.”
Williams and Ginger lived many years on Lake Lanier. Williams had his own landing, as he lived at the very end of the first basin cove. At 100 years old, he was still restoring three Chris Crafts and had attended a boat show in Georgia.
Williams brought the first motorboat to Lake Lanier in the late 1920s and later helped introduce boats in South Carolina, Georgia and Florida. He also used to tell of the first waterskiing ever done on Lake Lanier and about ski shows and boat races that used to be held there.
The Lake Lanier boat landing was named after Williams last year, just before he turned 104 years old.
Williams was also a handyman and said he never went anywhere without a toolbox. He once said people “would be amazed at what you can do with a pair of pliers and a roll of duct tape.”
The Bulletin asked Williams in 2007 what his secret was for a long life. Williams said living so others see Jesus through him and eating less were his keys to a long, happy life.
Frank and Ginger Williams were married in 1926 and celebrated 76 years of marriage before her death in 2002.
Williams was one of six children. He had one son, Edward Williams, who died many years ago, and a grandson, Edward Williams Jr., who died a few years ago. He is survived by a granddaughter, Donna Lynn Manning, and five great-grandchildren.
Condolences left on the Petty Funeral Home website and Facebook include: “Our hearts and lives were touched by ‘Boat,’” “God speed, my dear friend. I will never forget you,” “You never met a stranger” and “You will be missed more than words can say and you will be in our minds and hearts forever.”
Visitation services were held last night for Williams at Petty Funeral Home in Landrum. Graveside services will be held today at 2 p.m. at Evergreen Memorial Gardens.